Cassini spacecraft is about to reach Saturn rings 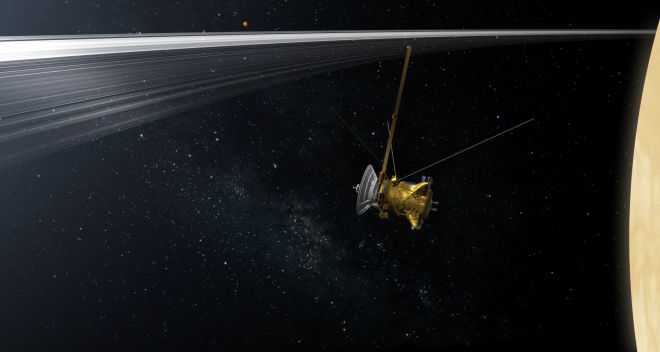 It’s the beginning of the end. On Nov. 30, NASA’s Cassini mission will begin the ring-grazing final chapter of its career at Saturn, one that will end with the spacecraft’s terminal plunge into the gas giant’s unforgiving atmosphere.

The second half of this chapter, in which the spacecraft will dive through the gap between Saturn and its rings, will be like a whole new mission, said Linda Spilker, Cassini’s project scientist at NASA's Jet Propulsion Laboratory.

“We’re so close to Saturn that we’ll really get measurements that just haven’t been possible,” she said.

Launched in 1997, Cassini was sent to explore Saturn and its surrounding panoply of lunar satellites. Over more than a decade of exploration, it has offered unprecedented insight into the gas giant as well as its diverse array of moons — and in so doing, shed light on the evolution of the entire solar system.

Among its many lunar discoveries, Cassini has spotted geysers jetting from beneath the surface of icy Enceladus, a sign of potentially life-friendly waters within. It has also found hydrocarbon lakes and methane-carved canyons on colossal moon Titan.

The mission’s engineers have now been ratcheting up Cassini’s orbit to raise its tilt with respect to the planet’s equator. And between Nov. 30 and April 22, the spacecraft will loop over the planet’s poles, executing deep dives every seven days to skim unexplored outer edges of Saturn’s main rings.

Those revolutions will allow scientists to better understand the strange hexagon-shaped jet stream at the north pole, first spotted by the Voyager mission in the 1980s – and how it has managed to keep its shape for so long. (To add to the mystery, scientists with NASA’s Juno mission recently discovered that Saturn’s fellow gas-giant Jupiter had no such hexagon at its northern pole.)

“It’s still an interesting puzzle,” Spilker said. “How could this jet stream keep this six-sided shape and rotate as a unit for such a long time?”

In a number of these 20 dives, Cassini will use its instruments to study gas and dust particles to better understand the rings’ origins and evolution. Some of the main rings could be observed in fine detail that hasn’t been seen since the spacecraft first arrived.

“There’s a lot of questions about the rings,” Spilker said. Each ring, and the moons that shepherd them, could offer a wealth of insight into their evolution.

Take the A ring, filled with small features called “propellers,” thought to signal the presence of a hidden moonlet. Full-blown moons shepherd their rings, carving gaps that look like black lines through the rotating bands. These propellers might be a hint of how small, young moons first started to make their marks on their home rings.

But these 20 revolutions are just the opening act to the Grand Finale orbits, 22 passes starting in April that will take the spacecraft to just 1,012 miles off the planet’s thick cloud-tops. Cassini will shoot repeatedly through the narrow space between Saturn and its icy rings, a maneuver that will allow it to measure the mass of the planet and calculate the mass of the rings alone.

Knowing their mass will help answer a long-standing question about the rings: Are they a relatively recent addition to Saturn, or did they form with the birth of the solar system well over 4 billion years ago?

Cassini does not get a peaceful ending. The spacecraft must be intentionally crashed into Saturn because its limited fuel reserves will soon run out – and the scientists want to make sure it won’t smash into and potentially contaminate possibly habitable moons like watery Enceladus (or even Titan).

So on Sept. 15, 2017, Cassini will execute its final dive and plunge into the planet, ultimately disintegrating in the upper atmosphere, taking measurements all the way. It will have performed 294 orbits over the course of its mission.

“It’s kind of a nice picture,” Spilker said. After studying the gas giant for 13 years, “here’s a chance for Cassini’s molecules to become a part of Saturn.”