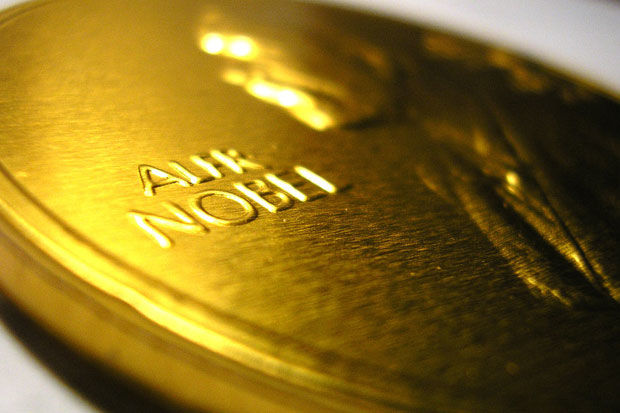 Saturday night in Scandinavia, a group of world-famous prizes will be awarded in physics, chemistry, medicine, literature, economics and world peace, all funded by the legacy of an industrialist best known for inventing dynamite.

For each of these winners, the prestige of the title “Nobel Prize laureate” — named for Alfred Nobel, Swedish inventor and philanthropist — will accompany their names henceforth.

This year the biggest item of contention is the awarding of the literature prize to American songwriter and musician Bob Dylan for his extensive catalog of lyrics. Traditionalists who scoffed at the choice said it should have gone to a traditional author.

Novelist Stephen King spoke in support of Dylan to Rolling Stone magazine this week: “People complaining about [Dylan’s] Nobel either don’t understand or it’s just a case of sour grapes.” King went on to add, “There are a lot of deserving writers who have never gotten the Nobel Prize. And Gary Shteyngart will probably be one of them.”

The reclusive Dylan greeted news of his award two months ago with silence and did not respond to several attempts by the Nobel committee to contact him. At the end of October, the 75-year-old songwriter and performer told the Nobel committee by telephone that he was honored to receive the award, but that he would be unable to attend the traditional prize ceremony.

A longtime friend, musician Patti Smith, is expected to perform a tribute to Dylan, and he has sent a speech to be read afterward.

This year’s winner of the Nobel Peace Prize is Colombian President Juan Manuel Santos for his long, ultimately successful effort to make peace between the Bogota government and Colombia’s FARC rebels. More than a quarter-million people are believed to have died during five decades of conflicts between the two sides.

Santos has said he will donate his prize money — more than $900,000 — to projects, foundations or programs that assist war victims and help with reconciliation.

Nobel prizes have stirred controversy on many previous occasions, but usually for political reasons. In 2009, U.S. President Barack Obama was awarded the Nobel Peace Prize after he had been in office less than a year, before many of his administration’s subsequent accomplishments.

A series of announcements in early October every year tells the world who the prizewinners are, and they each receive their awards December 10. The Nobels for academic subjects — physics, chemistry, medicine, literature and economics — are given out at a ceremony in Stockholm, Sweden’s capital. The peace prize, considered the most prestigious honor, is awarded in Oslo, Norway’s capital and home of the Nobel Institute.

The laureates are expected to attend a number of events over several days of Nobel ceremonies and celebrations — public appearances, the prize ceremony, at which they will be expected to speak, and a banquet. The king and queen of each country generally attend the ceremonies.

In Stockholm Saturday, three scientists will receive the chemistry prize for their work in developing molecular machines: Pierre Sauvage of France’s University of Strasbourg; British-born James Fraser Stoddart, who is a professor at the United States’ Northwestern University; and Bernard Feringa of the University of Groningen in the Netherlands. When more than one person wins a prize, the winners divide the money equally.

The physics prize goes to three British-born scientists who are professors at U.S. universities, for their work on exotic states of matter: David Thouless of the University of Washington, Duncan Haldane of Princeton University and Michael Kosterlitz of Brown University.

The prize for medicine or physiology goes to Japanese cell biologist Yoshinori Ohsumi of the Tokyo Institute of Technology’s Institute of Innovative Research. He is being honored for his research on the process of autophagy, or how cells destroy and recycle their components.

And the prize in economic sciences — a separate award established in 1968 and funded by the Swedish national bank in honor of Alfred Nobel — will go to British-born Oliver Hart of Harvard University and Finland-born Bengt Holmstrom of the Massachusetts Institute of Technology, for their work on contract theory and design.