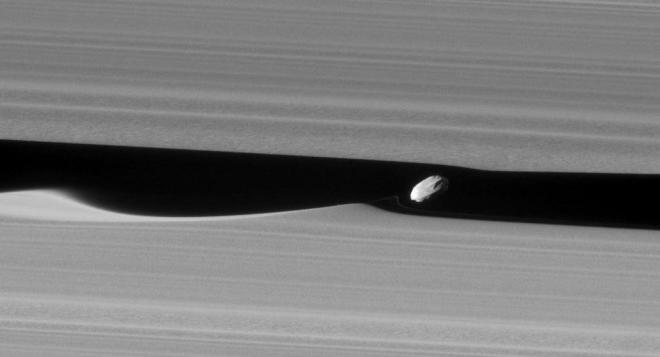 A NASA spacecraft managed to obtain close-up images of a moon hidden within one of Saturn’s rings.

During a grazing pass over the outer edges of Saturn's rings, NASA spacecraft Cassini managed to snap close up pictures of Daphnis, a moon concealed within the Keeler Gap – a 42-kilometer-wide gap in the planet's A Ring.

One of Daphnis’ unique features is that the moon’s gravity makes waves along the edges of the Keeler Gap, in both the horizontal and vertical directions.

"The image was taken in visible (green) light with the Cassini spacecraft narrow-angle camera. The view was acquired at a distance of approximately 17,000 miles (28,000 kilometers) from Daphnis and at a Sun-Daphnis-spacecraft, or phase, angle of 71 degrees. Image scale is 551 feet (168 meters) per pixel," a statement posted on NASA’s official website reads.

Cassini-Huygens is a joint effort between NASA, the European Space Agency (ESA) and the Italian Space Agency (ASI). Launched in 1997, the spacecraft Cassini arrived at its destination in 2004 and since then has been studying Saturn and its moons from orbit. Huygens, a probe carried by Cassini, landed on Saturn’s largest moon, Titan, in 2005.