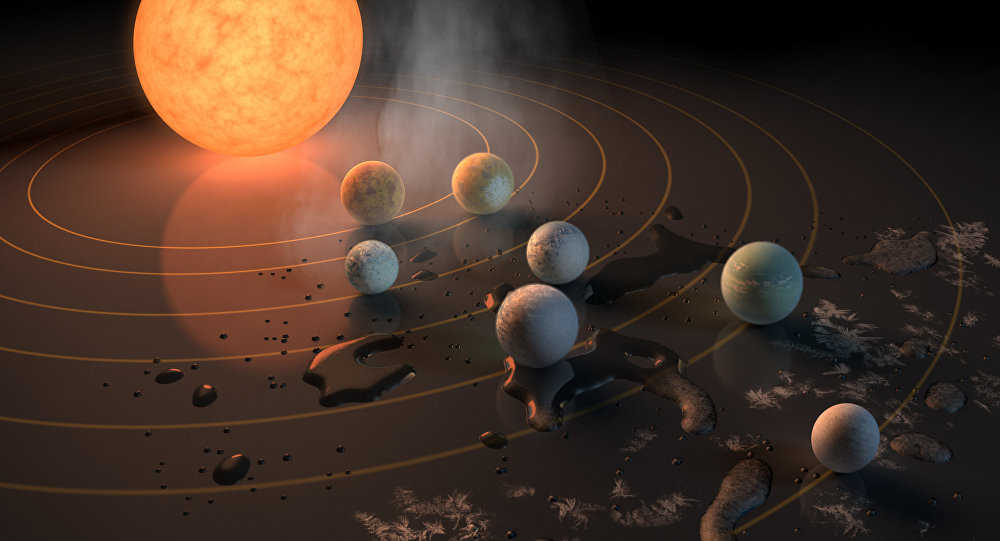 According to a prominent Belgian astronomer, the name of the recently discovered star system containing several potentially habitable exoplanets, and the telescope program used to find it, is all about a beer brand.

Axar.az reports earlier in February, NASA announced the discovery of at least seven Earth- and Venus-sized exoplanets orbiting a star known as TRAPPIST-1, some of which may have the conditions for life.
Notable Belgian astronomer and astrophysicist Michael Gillon told Sputnik France however that despite NASA’s role in discovering the planets, the first celestial bodies in the TRAPPIST-1 system were found by Belgian researchers.

"There were other planets found in addition to those spotted in 2016. We then used the (NASA’s) Spitzer telescope to establish a pattern, because even though we discovered the planets we had to establish a connection between the signals we observed at different times; there was also a lot of ambiguity in our data. So we asked NASA to loan us their telescope and used it to observe the system for three weeks. The NASA space telescope played an important role, but the star system was not discovered by NASA," Gillon said.

He also revealed that the acronym TRAPPIST, a reference to Trappist beer, was in fact chosen to emphasize the ‘Belgian origins’ of the project.

"We wanted to hint at the Belgian origins of this project and so we devised the acronym TRAPPIST — TRAnsiting Planets and PlanetesImals Small Telescope. And the beer reference was chosen because Belgian beer is well known around the globe, and Trappist beer is considered to be one of the best beer brands in the world, with most of its varieties being brewed in Belgium," the astronomer explained.

According to Gillon, the TRAPPIST planet-searching effort will also be bolstered by SPECULOOS (Search for habitable Planets EClipsing ULtra-cOOl Stars) – an array of four telescopes soon to be installed in the Atacama Desert in Chile.

And while scientists can’t yet reach the TRAPPIST-1 system in person in order to ascertain the presence of living organisms there, they can remotely study the planets’ atmosphere for "traces of molecules related to life, the kind that are produced by living organisms."

"Life does not exist only on Earth but, undoubtedly, everywhere in the universe," Gillon declared.