Evidence of ancient tsunamis on Mars 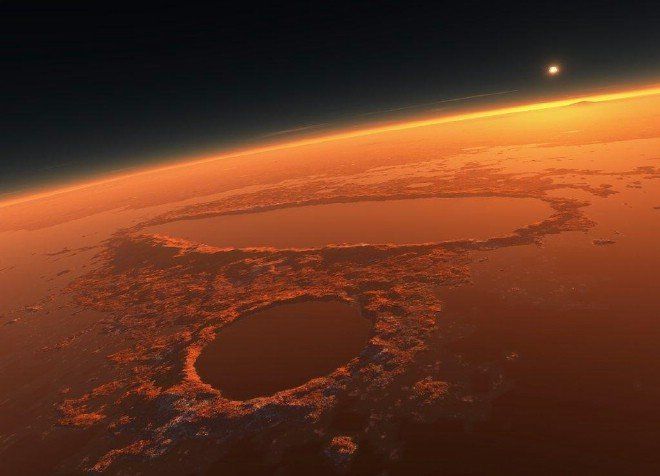 Evidence points to an ancient tsunami on Mars that cataclysmically altered the young planet approximately 3 billion years ago. This lays credence to the theory that Mars was once a watery world.

Axar.az reports that in a paper published in the Journal of Geophysical Research, the international team detail their discovery of what they believe to be a tsunami impact crater. Proponents of the Wet Mars theory have been searching for such a crater for years, without success.

"We found typical tsunami deposits along the dichotomy between the northern hemisphere and southern hemisphere of Mars. It supports that there was, at that time, a northern ocean," study lead and professor of geophysics with Université Paris-Sud Dr. François Costard told the BBC.

A thumbprint-shaped series of ridges was discovered on the Martian surface, which has previously been attributed to a mudslide or glaciers. However, it may have also have been caused by a tsunami — and a nearby crater corroborates that theory.

The researchers suggest that the Lomonosov Crater, a 93-mile long formation named in honor of the 18th century Russian polymath Mikhail Lomonosov, and the thumbprint formation are evidence of the first and second tsunamis, respectively. A numerical model corroborates their findings. They also contend that there is no feasible explanation for the ridges in light of the new evidence.

The Wet Mars theory holds that around 3.8 billion years ago, nearly half of the rusty red world was covered by ocean. Bit by bit, the water turned to vapor and escaped through Mars' thin atmosphere, leaving the planet in its present desiccated state.

"The possibility that a large ocean once occupied the Martian northern plains is one of the most important and controversial hypotheses to have originated from the exploration of Mars," the team wrote in the study.

"We mapped lobate deposits, which appear and are potential tsunami deposits associated with the existence of a former ocean. We identified the most probable crater sources of the proposed tsunami deposits from a numerical modeling."