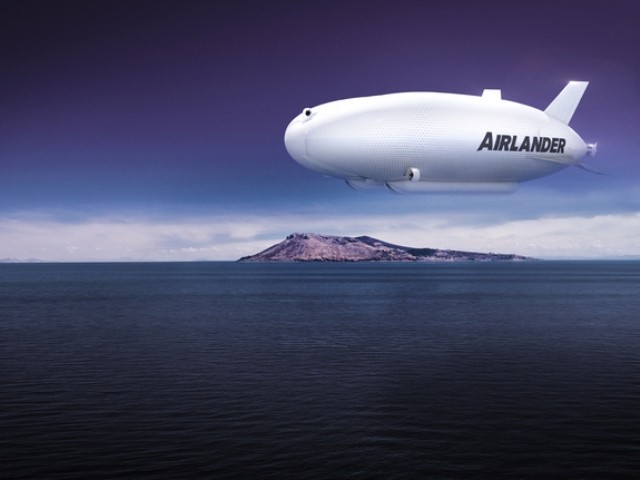 The world's largest aircraft, some 65 feet (20 meters) longer than the world's biggest passenger airliner, is just about ready to leave its hangar near London and take to the skies.

At 302 feet (92 meters) long, the hybrid Airlander 10 — which mixes tech from airplanes, helicopters and airships — even dwarfs the largest passenger airliner, the Airbus A380 (also called the Superjumbo), and boasts a weight of 44,100 lbs. (20,000 kilograms), according to its maker, Hybrid Air Vehicles in Cardington, England.

In addition to its gargantuan size, the prototype hybrid vehicle (which looks like a massive blimp) has endurance on its side: The Airlander 10 is designed to reach altitudes of up to 20,000 feet (6,100 m) and stay aloft for five days when manned and up to two weeks when unmanned.

The aerodynamic shape of the helium-filled hull provides 40 percent of the hefty vehicle's lift, according to company officials. Air-filled bags called ballonets in the hull can be inflated or deflated to change the craft's altitude. In addition to remaining buoyant, the Airlander will be able to cruise through the air at up to 91 mph (148 km/h), propelled by its four 350-horsepower, V8 diesel engines, said Hybrid Air Vehicles.

"It's really quite a special machine to fly," said test pilot David Burns.

The Airlander 10 could be used for diverse missions, its functionality resting on two qualities: "It can stay in the air for days and even weeks carrying a lot of weight on an ultra-stable platform," Chris Daniels, head of partnerships and communication at Hybrid Air Vehicles. "And it also has the versatility to land and take off from pretty much any surface, including water, carrying up to 10 tonnes [about 22,000 lbs.] of cargo."

With its "ultra-stable platform," the Airlander 10 could be used for search and rescue, patrol and surveying. "This may be coastguard duties, academic research or perhaps a Wi-Fi platform for rock festivals."

Before reaching its lofty goals and offering rides to commercial passengers, the Airlander, which reportedly cost $35 million to produce, will complete ground tests and then 200 hours of test flights.