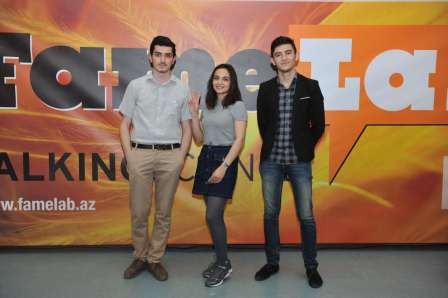 The final phase of Famelab (Fame Laboratory) contest being the joint project of British Council and the Caucasus University was held, local media reports.

Founded by "Cheltenham Science Festival", UK, the said contest aims at encouraging students who exercise special interest for science and technologies to share their views publicly.

The final phase that gathered people from between 18-35 age category engaged in science, sociology, technology, engineering, medicine and math and enabling qualifying only 10 participants out of multitude ones was held in a very tense condition.

After 20 minutes break with the consideration of the votes coming from the audience the board of juries announced the winners of the final, which ran as follows: BHOS student Mirlan Karimov became the winner of the first place and the one who became mostly favored presenter.

To remind it should be stated that the winning project of the above contest will represent our country at "Cheltenham Science Festival" to be held in UK in June 2016.

In concluding part of the event Caucasus university rector Ahmat Senich and British Council country director, Elizabeth White granted the presents to participants of the contest and the winners were granted the awards.