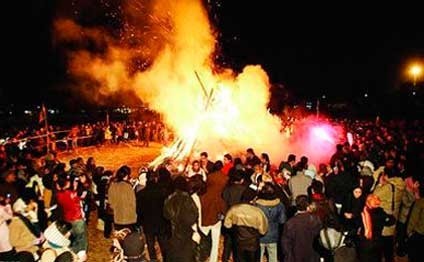 Fire Tuesday is a second charsanba up to Novruz (spring) Holiday. Fire motive is an essential at every Tuesdays.

The Spring is coming, which means the festive Novruz Holiday won’t keep us waiting. Novruz, loved by all Azerbaijanis, is celebrated on the day of the vernal equinox and symbolizes a new life.

Each Tuesday has its own traditions. This year, the second Tuesday, or Fire Tuesday, falls on March 1. Fire Tuesday honors fire, which means warmth and comfort. Ancient legends associate fire with the Sun and light.
Fire is the symbol of purification and clarification. Fire is never put out by water; it burns down by itself. It is very important to light a bonfire in every yard on Fire Tuesday, because fire means the year will be warm and fertile.

In ancient times, a newborn baby was laid on ashes to guarantee his health. It was also believed that those covered their faces with ashes would have a beautiful sweetheart.

On Fire Tuesday people jump over the fire, because it is traditionally believed that all troubles and hardships will be left behind, and the new year will be happy and prosperous. It is believed that immediately after Fire Tuesday the sun gradually begins to warm the earth, and the spring wakes up.