Astronaut Scott Kelly has returned to Earth after a year 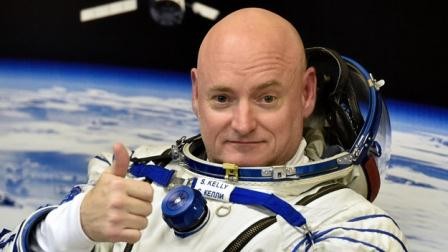 After nearly a year on board the International Space Station, astronaut Scott Kelly is now back on Earth. He touched down in Kazakhstan at 11:26 p.m. Eastern time, having completed 340 days in space. His return brings NASA one step closer to one day sending astronauts on a years-long voyage to Mars.

Kelly returns to Earth with a few records to his name:

He will have spent more consecutive days in space —340 — than any American. (The international record belongs to cosmonaut Valeri Polyakov, who spent 437 days on the Mir space station).

• Kelly will also hold the record for the American who has spent the most total number of days in space, at 540. (Again, a Russian, Gennady Padalka, holds the world record, at 879 days).

• This mission, however, was not about breaking records. It was a science experiment to study the effects of microgravity on the human body, so that NASA can prepare astronauts for longer flights to Mars and beyond.
We already know that space is extremely harsh on the body. Muscles and bone atrophy in the absence of gravity. Eyesight diminishes, and astronauts routinely suffer from insomnia. What NASA doctors are interested in is seeing how those changes impact an astronaut over the course of a year, rather than the typical six-month mission. They're hoping to find ways to make long spaceflight gentler on the human body. But answers won't come quickly.

"While scientists will begin analyzing data from Kelly and [fellow year-long ISS crew member Mikhail] Kornienko as soon as they return to Earth, it could be anywhere from six months to six years before we see published results from the research," NASA reports on its website.

• Kelly's twin brother, Mark, will serve as a point of comparison for the study. During the mission, both Scott and Mark regularly took samples of their blood, saliva, stool, and urine for testing. Scientists will continue to analyze the samples, looking for signs of inflammation, DNA damage (and cellular aging), and changes in the micro biome (the colonies of gut bacteria that aid in our digestion).

NASA doctors are also hoping to learn about the impact space radiation has on body cells, and how bodily fluids shift over the course of a long mission. Astronauts' faces tend to grow puffier and rounder with misplaced fluid as mission duration increases. This negatively impacts their eyesight. How to prevent the deterioration of eyesight in space isn't well-known. (During their stay, Kelly and Kornienko tested out a pair of vacuum pants meant to keep fluids from moving from the lower body up to the head).