The banned songs to presidential candidates 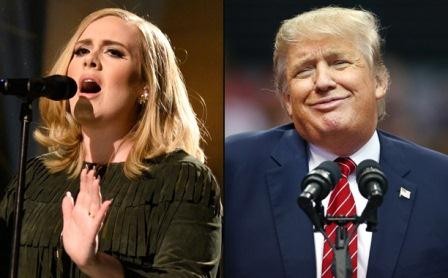 Every rally needs music — the only problem is, musicians don’t always want to lend their songs to political campaigns. Here are 8 musicians who’ve spoken out against presidential candidates playing their tracks at events.

If you’re a Republican, don’t play a Springsteen song at your rally — especially not “Born in the U.S.A.,” a track that’s not as patriotic as Reagan, Dole, and Buchanan thought. Springsteen requested they all stop playing the song, and beginning in the ‘90s, he started performing a dour, acoustic version of the 1984 track at shows in order to more clearly convey its antiwar sentiment.

Like Springsteen, Mellencamp has a bit of a history of telling Republican candidates to stop using his music: He objected when Reagan used “Pink Houses” in 1984, when Bush Jr. used “R.O.C.K. in the U.S.A.” in 2000, and when McCain used both “Our Country” and “Pink Houses” in 2008.

Unlike most musicians who ask politicians to stop using their songs so it doesn’t seem like they’re endorsing them, Sting requested that Bush stop playing “Brand New Day” simply because he didn’t want to get involved in the U.S. election as an Englishman. “It’s not a polite thing to do,” his manager at the time, Miles Copeland, told Salon. Or so he said: Copeland also added that Sting would be telling Bush opponent Gore to stop using “Brand New Day” as well, but that, according to reports, never happened.

McCain loves ABBA. In fact, he once told Blender that ABBA’s “Dancing Queen” and “Take a Chance On Me” were in his top 10 favorite songs. But the Swedish band wasn’t willing to take a chance on McCain when he selected one of their singles for his 2008 campaign.

A Democrat was asked to stop using a song for a change when Sam and Dave’s Sam Moore requested that Obama stop playing “Hold On, I’m Comin’ at rallies in 2008. In a letter to Obama, he wrote that “it is thrilling … to see that our country has matured to the place where it is no longer an impossibility for a man of color to really be considered as a legitimate candidate for the highest office in our land” but also clarified that he had not endorsed Obama and his vote “is a very private matter between myself and the ballot box.”

Most musicians simply request that politicians stop using their songs, but Survivor went ahead and sued Gingrich for playing “Eye of the Tiger” during his presidential campaign. (They went easier on Romney, though, simply asking that he stop using "Eye of the Tiger," which his team did).

Trump announced his bid for president with the help of Young’s “Rockin’ in the Free World” to which Young immediately objected. In a statement, he said that Trump was not authorized to use the song. The Canadian citizen also revealed that he’s “a supporter of Bernie Sanders.”