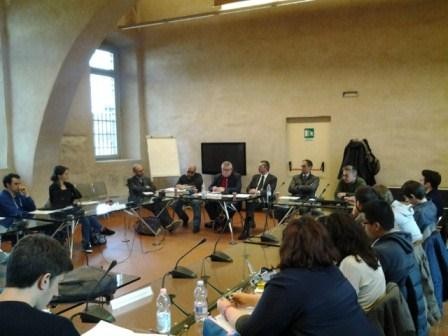 A conference entitled "Italy and Azerbaijan: 25 years of independence" has been co-organized by Azerbaijani Studies Center based in Levico Terme, Italy, and the Caspian Sea Research Center at the Italian University of Bergamo.

In his opening remarks, head of the Caspian Sea Research Centre Michele Brunelli highlighted the issues to be discussed at the event.

The event then heard a speech from Director of the Azerbaijani Research Center Fernando Orlandi on "Azerbaijan and the Southern Gas Corridor" project. Mr. Orlandi analyzed the foreign policy of Azerbaijan, the European Union and the US in the context of the project. He noted that a well thought-out foreign policy of Azerbaijan allowed the country built itself a strong international image. "Azerbaijan's election as a non-permanent member of the UN Security Council for a two-year term in 2011 is a clear sign of this achievement," he added.

Leading researcher at Milan-based Institute for International Political Studies, author of several books and articles on Azerbaijan Carlo Frappi highlighted strategic partnership between Azerbaijan and Italy. He stressed the importance of TAP project for Europe, and hailed trade relations between Azerbaijan and Italy. Providing an insight into the Armenia-Azerbaijan Nagorno-Karabakh conflict, Mr. Frappi noted that despite the fact that UN and other international organizations adopted resolutions on the dispute no progress has yet been made.