20 January - a day of mourning in Azerbaijan 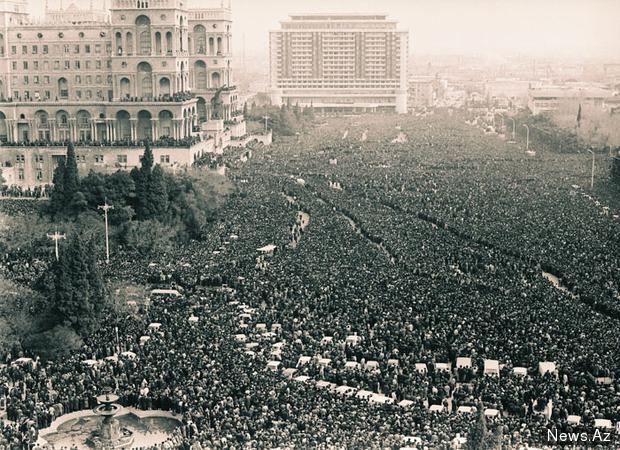 20 January 1990 is a day, which went down in history of the struggle for the freedom and territorial integrity of Azerbaijan, as a heroism page.

Leading of the battle divisions of the Soviet army aimed against wide mass who got out in the streets and squares of Baku to protest against aggressive actions of Armenia, which was raising territorial claims to our country, against protection rendered to this country by the government of the former USSR had brought to the unprecedented tragedy in Azerbaijan.

On 18 January 1990 the Presidium of the Supreme Soviet of the USSR issued a decree "On the realization of the extraordinaty situ-ation in the city of Baku since 20 January", which had not been co-coordinated with the parliament of Azerbaijan and the purpose was to choke the people’s voice, to stop the demonstrations and the movement. Later on the night of 20 January a big contingent of the USSR Armed Forces was sent onto the streets of Baku. As a result, the Soviet Army committed a horrible crime against the Azerbaijani people. That night the Soviet Army displayed particular cruelty against the people. They remembrance used chemical weapons, shot at ambulances and the wounded and mutilated dead bodies. According to official sources, as a result of this aggressive act, which was against the principles of international law, democracy and humane values, 131 people died, 774 were wounded, 400 imprisoned and four went missing. During the tragedy the courageous sons of the Azerbaijani people who stood up for the motherland’s dignity, honour and freedom became martyrs. The day after the tragedy, despite the pressure of the Soviet Army, people on the the streets displayed their hatred both for those who had enforced the clampdown and for the Communist Parties of the USSR and Azerbaijan. On the night of the tragedy, the leader of the republic, fearing the people’s anger, escaped to Moscow. Azerbaijanis living in Moscow arranged a meeting about the tragedy. At that time Heydar Aliyev was living in Moscow and he came to Azerbaijan’s permanent representation and presented his condolences to the people of Azerbaijan. In a speech he emphasized that the initiators of the tragedy were the then officials of the USSR and Azerbaijan and they had done nothing to calm the people down. Heydar Aliyev, who considered this tragedy a crime against the Azerbaijani people, emphasized that the initiators Martyrs’ monument, Baku Martyrs’ monument, Baku bore responsibility for it and should be properly punished.On those terrible days valiant sons and daughters of our Motherland, the country's freedom, honor and dignity of whom was above all, sacrificed their own lives and rose to the TOP of shahid.

Tragedy of January 20 , which brought to huge losses and destruction of innocent people, demonstrated martial spirit, inexorability and pride of our nation, which couldn't stand the policy of the government of Gorbachev headed criminal empire treacherous towards Azerbaijan, intended to the freedom and independence. As a result of it, we gained our independence many years we had been dreaming of and our country had achieved sovereignty.

In spite of the fact that a few years has passed since those bloody days, our nation remembers that dreadful night and expresses its deep contempt to those who committed that tragedy. Our republic celebrates the day of tragedy of January 20 broadly every year, which had immortalized in the vital memory of our nation as a Day of the Nationwide Sorrow.