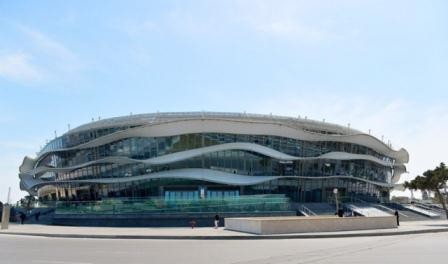 The National Gymnastics Arena in Baku will host a children’s show on the occasion of Novruz holiday on March 19, Mariana Vasileva, head coach of Azerbaijan national team in rhythmic gymnastics, member of the executive committee of Azerbaijan Gymnastics Federation, told Trend March 18.

The event has been initiated by the management and coaching staff of ‘Ojag’ sports club, said Vasileva, adding that around 300 children aged 4 to 12 years will take part in the show.

The head coach noted that the show program will include national and foreign music, as well as Azerbaijan’s national dances.

Following the event, a bonfire will be lit for the children near the National Gymnastics Arena, she added.

“All performers are athletes of the “Ojag sport” club. Children will demonstrate what they have learned in a short period of training at the club,” said Vasileva, adding that some of them have been training for only 3-4 months.

All coaching staff of “Ojag sport” club, as well as all experimental groups will perform at the end of the program, she added.

The experimental group of “Ojag sport” club includes children aged from four to six years, who have not been determined for various gymnastic disciplines, Vasileva said.

“Children from these groups train in all six gymnastic disciplines - artistic, sports (male and female), acrobatic, trampoline gymnastics and aerobics,” noted Vasileva. “After one year of training, we will decide where children can express themselves better.”