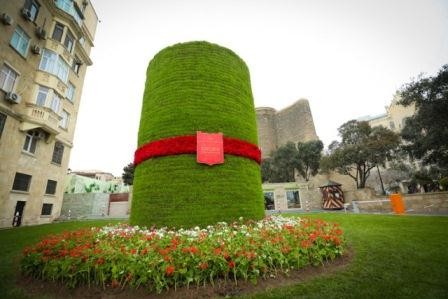 Report informs, Novruz in Azerbaijan is a traditional holiday, which celebrates the New Year, and the coming of Spring in Azerbaijan Republic. When North Azerbaijan was part of the Soviet Union, celebration of Novruz was generally unofficial, and at times even prohibited.

Currently in Azerbaijan, Novruz is treated as an official public holiday. In accordance with Article 105 of the Labour Code of Azerbaijan passed in 2006, workers receive five days off for Novruz.

Novruz is a family holiday. In the evening before the holiday the whole family gathers around the holiday table laid with various dishes to make the New Year rich.

The decoration of the festive table is khoncha, a big silver or copper tray with Samani, green shoots from wheat seeds placed in the centre and candles and dyed eggs by the number of family members around it. The table should be set, at least, with seven dishes.

Novruz also has interesting traditions related to water and fire. Being the land of the fire, Azerbaijan has rich traditions. Fire is the symbol of purification and clarification. Both men and women jump seven times over a fire and say, "'Give me your redness and take my yellowness." The fire is never put out with water but it is left to burn out. Young boys and girls take ashes from the fire and throw it far from their houses, which symbolizes throwing away of all of the family's mischance.