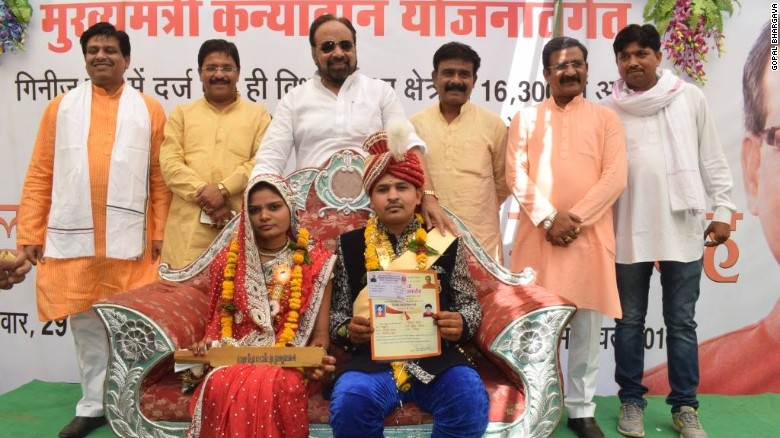 An Indian state minister has come up with a controversial way to fight alcohol abuse.

Gopal Bhargava, a state minister in India's Madhya Pradesh, gave 10,000 wooden bats to newlyweds and their family members at a mass wedding ceremony for poor women in Garhakota district.

Alcoholism, he says, is a serious issue for the women in his district. "When I go to the village all the women tell me to ban liquor," he told CNN.

Their husbands often spend all their earnings on drink, he said, leaving little for the household.

"If a family gets 100 rupees, and then at least 50 rupees are spent on the alcohol," Bhargava said.

Many of these women also face domestic violence at the hands of their partners, he said.

While liquor is not banned in Madhya Pradesh, the Indian government is increasingly regulating alcohol consumption across the country.

Four states in India have some type of alcohol ban in place. In April, the Supreme Court banned all shops from serving alcohol within 500 meters of major roads.

The country also regularly enacts dry days when no liquor is sold, often on holidays or on the day of an election.

In places where there is no legal restriction on alcohol, people take the law in their own hands.

"This bat is given to reform the alcoholics... police will not say anything" - Quote on wedding gifts reads.

The bats, known in Hindi as "mogri" are traditionally used for washing clothes. But now, Bhargava says, "they're multipurpose."

The bat has inscriptions on both sides, loosely translated as, "This bat is given to reform the alcoholics," and "police will not say anything," on the other.

Seven hundred couples got married at the ceremony. Aside from the bats, they received household items like cooking utensils, beds and a stipend for a mobile.

Bhargava emphasizes that the bats are meant to be used in self-defense.

"You can use it below the belt," he said.