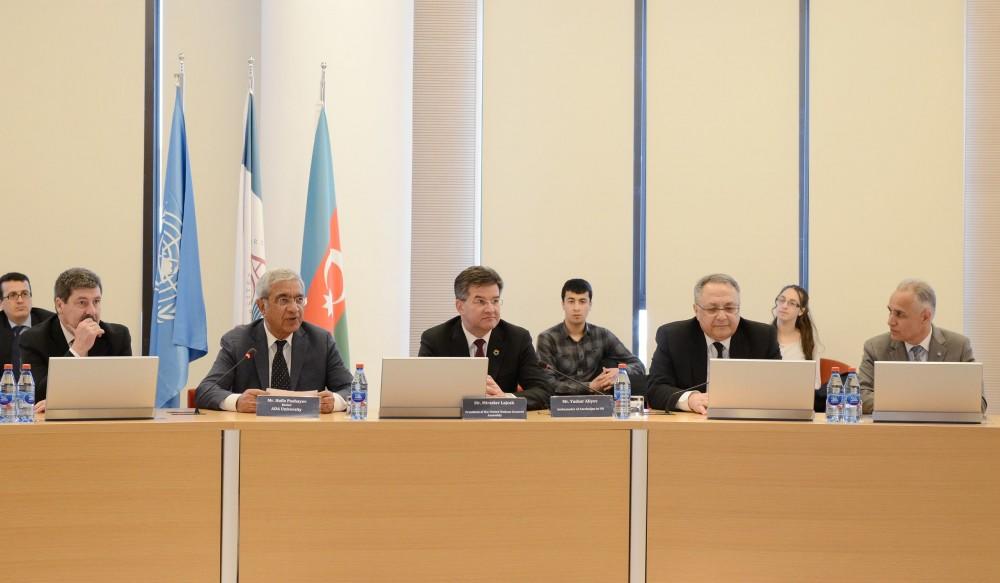 An event on the topic “Current State of Multilateral Cooperation” was held at ADA University in Baku on April 5.

The event was attended by ADA University Rector Hafiz Pashayev, Permanent Representative of Azerbaijan to the United Nations Yashar Aliyev, UN Resident Coordinator Ghulam Isaczai, President of the 72nd Session of the UN General Assembly Miroslav Lajcak, as well as students and teachers of ADA University.

The ADA University rector made the keynote remarks at the event.

Addressing the event, Miroslav Lajcak spoke about the importance of multiculturalism and noted that multiculturalism is the way to achieve common goals by coordinating national activities and positions.

“Multiculturalism also helps solve common solutions. The UN is a unique organization, because it is a multicultural forum. I know that the UN has sufficient mechanisms to tackle all difficulties. At present, there is a great need for multiculturalism,” he said.

Lajcak then spoke about the priorities of the UN General Assembly for 2018.

“Firstly, we should focus our efforts to prevent conflicts. The second priority is migration crisis. We must emphasize the positive aspects of migration. Our third priority is the continuation of sustainable development. The fourth priority is human rights and human dignity, and the fifth is reform. If we want to strengthen the system, we must support multiculturalism. We need to increase our common interests through dialogue. We need to bring the UN closer to people. We are doing everything to improve human life. We should be confident in people valuing this. I would like to call on each of you; there is no better way than multiculturalism to protect the interests of each country. We all want to live in a peaceful, prosperous country where human rights are respected. We are in need of a universal platform, such as the UN. No international platform can replace the UN. The current global atmosphere is very difficult," he added.