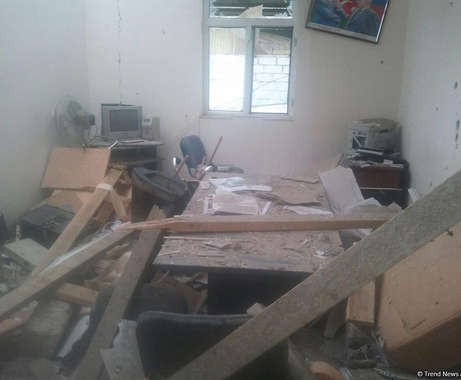 Armenia's armed forces have inflicted heavy damage to the Evoglu village of Azerbaijan's Aghdam district having intensively shelled the village on April 28 night.

Houses and public facilities in the village were destroyed.

Farming and private sector were also affected by the Armenian shelling.

On April 29, a group of journalists, consisting of representatives of foreign media accredited in Azerbaijan, and the local media, visited the Garadaghli village of Azerbaijan's Agdam district, which was shelled by the Armenian side from April 27 evening until April 28.

In the village the journalists surveyed the houses, which were destroyed by heavy artillery attacks and met with the village's residents.

Starting from April 27 evening until 04:00 (GMT + 4) April 28, the Armenian armed forces were firing at the Azerbaijani settlements and the Azerbaijani army positions in the Terter and Aghdam districts of Azerbaijan.

Two people were killed and many more wounded as a result of the Aghdam shelling. At least 84 houses in the district were heavily damaged, some of them completely destroyed.