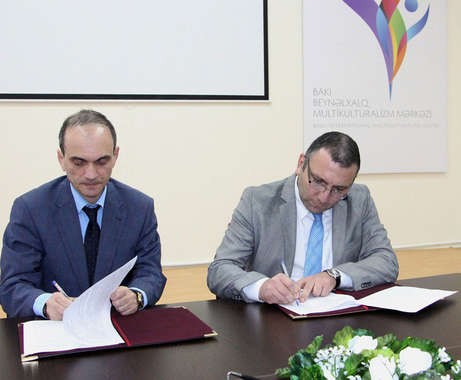 A branch of Baku International Multiculturalism Centre (BIMC) has been opened in Israel.

Under the memorandum, the sides will work together to promote different values such as culture, multiculturalism and tolerance, and ensure successful activity of the Israeli branch of BIMC, representing and protecting the interests of the centre.

The Israeli office will organize events to increase the international community's awareness of Azerbaijan's and Israel's history and culture.

Azerbaijan, located on the junction of two continents- Europe and Asia, created all necessary conditions for representatives of different nationalities, religions and cultures to exist freely.

The International Centre for Multiculturalism was established in Baku in 2014, as a concrete effort to promote the values of multiculturalism.

The multiculturalism centers have been also established in the regions of the country, as well as in Germany, Italy, Portugal, Russia, Kazakhstan and other countries.

This year, Azerbaijan hosted the 7th Global Forum of the United Nations Alliance of Civilizations.

By using the UN tribune, Azerbaijan once again showed its multiculturalism traditions, and urged the world countries to respect tolerance, intercultural and inter-civilization dialogue. Furthermore, Azerbaijan named 2016 the Year of Multiculturalism.

The Azerbaijani and Jewish peoples have a long tradition of tolerance and interaction. Estimated 9,000 Jews in the country are "fully part" of Azerbaijani society.

Israel recognized the independence of the Republic of Azerbaijan very shortly after the official dissolution of the Soviet Union. Diplomatic relations between Azerbaijan and Israel were established in April 1992.

Azerbaijan and Israel are focusing on many areas, and the four areas that relevant are telecommunications, agriculture, water supply and medical technologies.