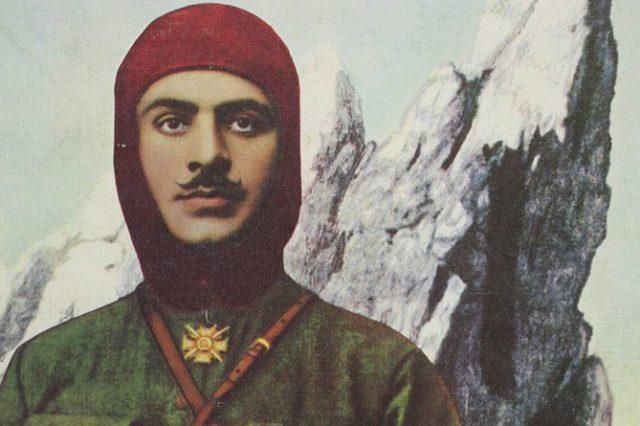 The well-known Russian Caucasian historian Oleg Kuznetsov familiarized himself with the "secret" of the central archives of the Federal Security Service of Russia. This folder contains information on the activities of Armenia's national hero, known as the Njde Nare, by Karegin Ter Arutyunyan.

Preface from Kuznetsov: “It is a crime to describe the biographies of Armenians written about their national heroes without sarcasm. The purpose of writing this in a scientific style is to increase the propagation of the Armenian propagandists to the scientific level or to decrease at the level of scientific hypocrisy. I couldn't handle any of that. That is why I presented a scientific work to the readers' judgment”

It is well known to the majority of the world population that today the most influential national hero of Armenia and the Armenian people is Garegin Ter Arutyunyan, nicknamed Njde. The Armenian meaning of the nickname does not sound like “Ments Murad” or “Great Murad”, but rather “left the country to earn money” (modern Russian-Armenian dictionary translated this form). To put it mildly, it means "migrant," "hobo," and "homeless".

Centuries-long migration of Armenians to the shores of the Eastern Mediterranean and Black Seas, it can be considered as a manifestation of a national psychotype that substantially explains the popularity of Njde's historical character among modern Armenians.

Karegin was naturally njde: born and raised in Azerbaijan (in the Nakhchivan district of Iravan province - red). In his youth, he moved to Bulgaria. After studying at the university for three years he returned to Azerbaijan. He remained under house arrest for three years. From there he secretly went to Petersburg and then to Bulgaria for 2 years. As we see, Njde's biography does not involve Armenia before World War I.

When the war broke out, he escaped from the Bulgarian army and fled to Georgia, joining the newly formed Armenian volunteer battalion of the Russian Empire in the Caucasus Front and entering the Ottoman Empire to fight. He stayed there until the Armenian Dashnak Republic was established in Azerbaijani lands in the summer of 1918. However, this fact does not indicate any pieces of evidence that he was in Armenia at that time.

The first documentary evidence of his existence in this country dates back to 1920. At this date, he was appointed as commissioner of Alexandropol, under the government's order, to surrender Kemalist Turkey to his troops. The stories about his military prowess on the Russian-Ottoman front are legends that have no endorsement or source.

From this point, his name is mentioned in the documents of the Soviet and "Kemalists" period as the main cause of genocide of Azerbaijanis in Zangezur and Abbasabad. However, there is evidence that he lived in the village of Paraga in Ordubad at that time, which is the territory of Azerbaijan, which has nothing to do with modern Armenia. This fact is another undeniable fact that Njde is a "njde".

In 1922, Njde fled to Tabriz and returned to Bulgaria from there. In 1944 he was arrested by the Soviet military intelligence agencies for his cooperation with the Nazis and for the crime of "anti-revolutionary activity" and handed over to the USSR.

Thus, Njde spends only 3-4 years of his 70-year life in modern Armenian lands. However, this does not prevent his compatriots from calling him "outstanding national hero, statesman, and political figure" who has no serious relationship with the history of Armenia.

All of these are global issues. Now let's touch on the special moments.

I want to show the intellectual dishonesty of the Armenian stupidity and propaganda through an episode of life that elevates Njde's glory. The main point is that the authors of this fabrication have long forgotten what, when, or what they were lying about.

We are talking about Njde's arrest in September 1944. After this arrest that he was immediately changed from an ideologue of the Armenian nationalism into a constantly followed political criminal.

Njde did not want to leave Bulgaria as the Soviet army approached Sofia. This move of his stemmed from the hope that the USSR would soon launch a war against Turkey and he would be out of danger. Njde thought he would have a special role in the war. After the Russian army entered the country, he wrote a letter to General Tolbokh, Commander-in-Chief of the Soviet Army.

The Soviet military intelligence in Bulgaria arrested him after finding out the Njde's cooperation with the Nazis. Counter-intelligence agents imprison him for being part of the Qaregin Njde Abvergroup 114 (Dromedar) intelligence agency.

Bulgarian police had already arrested him before Njde was detained by the Soviet army. Njde was also accused of cooperating with German intelligence.

My regular readers are well aware that I do not intend to boast of the services I have done to expose the artificial image of the "knight" caramel Njde, who worked for the welfare and enlightened ideals created by the people of the Armenian propagandists. But I want to remind you that last year everything was different. Last year Njde was considered to be almost the "national hero" of the Bulgarian people. The main proof of this fact was that the Armenian Diaspora had put a commemorative plaque in front of the house where Njde was imprisoned in Bulgaria.

Earlier, his portrays were on Wikipedia and the electronic encyclopedia of the International Armenian Foundation Hayazq. The commemorative plaque still hangs in front of his house in Sofia.

I especially share Njde's picture here to let the Armenian preachers know about the existence of people who reminds of their historical interpretations and tricks.

Even in this situation, the Armenians show their loyalty. And evidently, the Armenian and Bulgarian texts on the plate differ from each other.

The translation of the Bulgarian text is like this: “Armenian national hero, the hero of the Macedonian-Odrinsky militia and Bulgarian citizen General Garegin Njde lived in this house until 09.09.1944. He died in 1955 in Siberia. ” 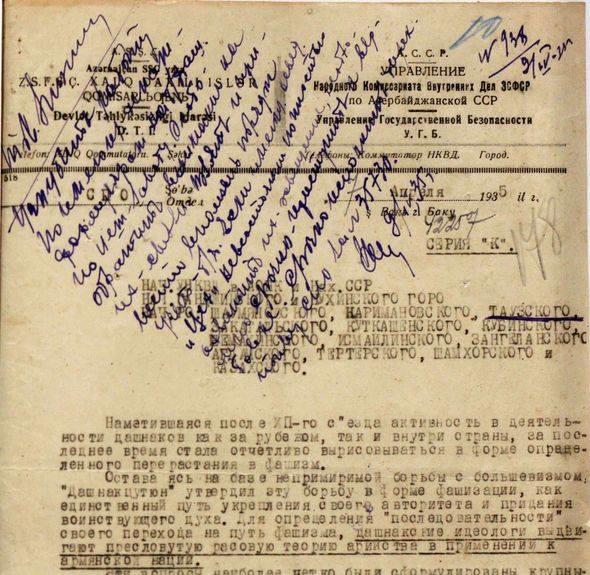 The Armenian text is somewhat different: "The national hero of the Armenian people, a Bulgarian citizen, commander of the Armenian Volunteer Army, General Qaregin Ter-Harutyunyan Njde lived in this house until 09.09.1944. He was born in 1886 and was deported to Siberia in 1955.

Nobody is interested in the fact that he could have been the farthest lieutenant in the Bulgarian army, but not the general. He was also arrested by the Bulgarian police for his involvement in German intelligence and handed over to the SMERS counter-intelligence unit. However, the incident did not take place on September 9, as it was reported in its official biography, but on 3 October - 2 October. On this date, the head of the department signs a decree on the arrest of Njde. Until then, he was accused of treason and kept in Sofia's Central Prison.

However, they believe that nobody can access this information but themselves. And this is their biggest mistake.

Njde's verdict was read in Moscow on April 24, 1948. Access to his "classified" material was taken from their hands.

Also, most copies of these documents are available in the Njde`s prison archive in the Department of the Russian Federal Penitentiary Service in Vladimir Oblast. Access to these documents is open to researchers, subject to certain limitations. Therefore, hiding the true identity of Njde, the crimes he committed, and the reasons behind his detention.

The most interesting aspect of this story is Njde's attitude towards his arrest. A copy of his political biography, published by him in the Bulgarian prison on September 1944, is being kept in Bulgaria, before being handed over to the Soviet military intelligence during his investigative, judicial and prison activities.

By the way, this biography in Russian was published by biographer Rafail Amburtzumyan.

I will not write the text from beginning to end. Only on the eve of his arrest, I will bring you a quote that perfectly describes Njde's moral and psychological condition. 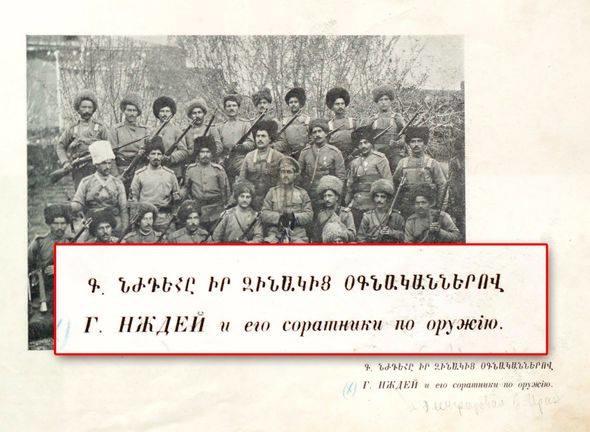 Njde perfectly captures his sentiments of the wilderness without the hope of salvation:

“The Soviet army arrived and the expected moment came. A few Armenians, who took advantage of the turmoil, began to perform the actions of those who were not fed with the milk of their people. They are the police agents who act like shoemakers. They are looking for me, accompanied by Bulgarian police. Ever-disrespectful slaves who always use external forces to extinguish their helpless hatred and always destroy their "enemies!"

Not only work but also market-based creatures with nationalist names, are at least as disgusting as they are. They have reduced their egoism to an animalistic level. Even if the cross is locked, no one will open the door if they go to the door of their friends, relatives, and relatives.

They forgot, they forgot that only because of my efforts they did not live the fate of the jews and that they had been rich for four years. Those who are hoping for a glance and greetings from you until today, are running away from you today, even in the shadows.”

P.S. We have to agree this is a powerful speech. It turns out that not only the Bulgarian police but also the Armenian diaspora living in Bulgaria was following Njde and handing it over to local law enforcement as an enemy of the Bulgarian people, not the hero of the Armenian people.

We conclude that Armenians not only love and hate Njde themselves. This is because the respect for his native ethnicity is measured by his proximity to the Nazis during World War II. As long as there were Nazis, Njde had authority among the Bulgarian Armenians. As soon as the Nazis went away, Njde's respect was gone. As the ancient Latin proverb says: "Sic transit Gloria Mundi" - "The glory of the world is temporary." This fact cannot be changed.

In summary, the issue of Njde's memorial plaque in Sofia with full of lies and paphos will be solved logically soon. I am sure that the Bulgarian authorities will get comprehensive information on Njde's true identity and his role in the history of their countries. They will realize that he is not a hero, but rather a treacherous soul who betrayed the country twice. There will not be any need for the existence of the plaque.

The only thing I want to say to the Armenian propagandists, who have fallen back of their smart initiative, is: “Gentlemen, stop! Otherwise, you will deny the previous ones with the next lie. This is the way to schizophrenia. ”