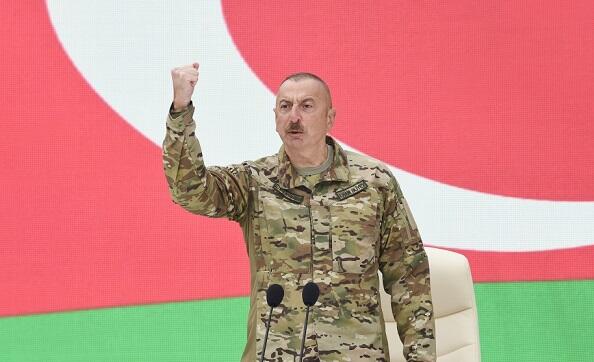 When some revanchist forces rise up in Armenia today, they should know that their heads will be crushed at any time, if necessary.

"We cannot allow Armenian fascism to rise again. We cannot allow Armenia to bring its army to a state where there is any threat to us. If we identify a possible threat, we will destroy it immediately. Everyone should know this - both Armenia and its supporters. Because this is a national defense, a matter of national security. At the same time, we are ready to cooperate - despite the fact that Armenia has committed genocide against Azerbaijanis at the state level. Although all our historical and religious monuments have been destroyed, we must look to the future. We, of course, will never forget the Armenian savagery. The main purpose of the establishment of the Military Loot Park, which has caused a great stir in Armenia today, is that the people of Azerbaijan will never forget this atrocity. We must never forget. We will never forgive it. Let everyone know. But at the same time, we must take the necessary steps to ensure our interests. The creation of the Zangazur corridor fully meets our national, historical and future interests. We will implement the Zangazur corridor, whether Armenia wants it or not. If he wants, we will solve it easier, if he does not want, we will solve it by force. As I said before and during the war, you must voluntarily leave our land or we will force you out. That's what happened. The fate of the Zangazur corridor will be the same.

Our main rival is time. Because the construction of railways and highways takes time. Therefore, all forces have been mobilized to implement this project. Thus, the people of Azerbaijan will return to Zangazur, which was taken from us 101 years ago," Ilham Aliyev said.