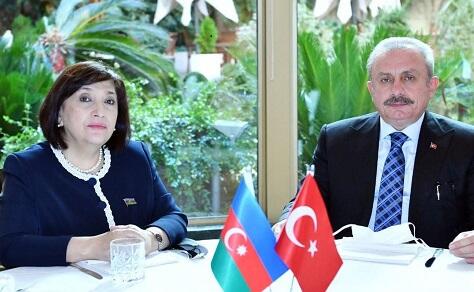 On November 27, Speaker of the Azerbaijani Parliament Sahiba Gafarova met with Speaker of the Turkish Grand National Assembly Mustafa Shantop, who is in Madrid, Spain, to attend the 143rd Assembly of the Inter-Parliamentary Union and the inaugural meeting of the Non-Aligned Movement's Parliamentary Network.

Axar.az reports that this was reported by the Press and Public Relations Department of the Milli Majlis.

Welcoming the Speaker of the Parliament and members of the Turkish delegation, the Speaker of the Milli Majlis said that, as President Ilham Aliyev said, there is no alternative to the Azerbaijani-Turkish relations in the world political system. The roots of these relations are based on the spirit of brotherhood between our peoples. Today, relations between Azerbaijan and Turkey are at the level of a strategic alliance.

Sahiba Gafarova said that the world once again witnessed this brotherhood in the 44-day war of Azerbaijan. The personal friendly relations of our heads of state play an important role in achieving the current high level of unity between our countries.

Sahiba Gafarova noted that this closeness between our peoples is reflected in the cooperation of the parliaments of the two countries both in bilateral format and within international organizations. Mutual friendship groups in our parliaments are distinguished by their activity.

During the meeting, Speaker of the Turkish Grand National Assembly Mustafa Shentop said that Turkey and Azerbaijan are two states, one nation, connected by deep historical roots of friendship and brotherhood for centuries. Mustafa Shantop noted that in the post-settlement period of the Armenian-Azerbaijani conflict, as President Recep Tayyip Erdogan said, we are always with Azerbaijan.

The speaker noted that it is very important to increase the number of mutual visits and meetings between our parliaments. The intensification of mutual contacts is an important contribution to the further deepening of relations.

The Speaker of the Parliament expressed satisfaction with the close cooperation of our deputies in international organizations, noting the importance of further strengthening this cooperation in the future.