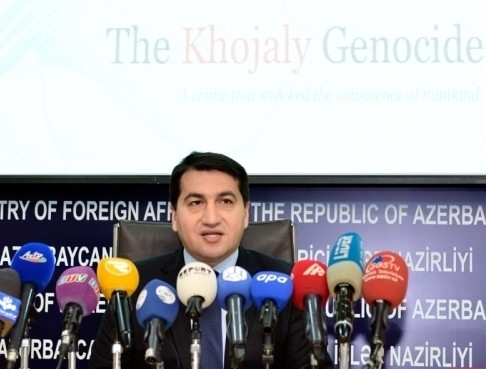 An act of genocide, a war crime and a crime against humanity was committed by Armenia in Azerbaijan’s town Khojaly, Hajiyev said.

He noted that the Khojaly genocide has been fully documented based on eyewitness testimonies, opinions of international organizations and materials of numerous media outlets and NGOs.

“In this sense, the responsibility of Armenia is not in doubt. The European Court of Human Rights in its judgment of 22 April 2010 qualified the events in Khojaly as “an especially grave crime, a war crime or a crime against humanity,” he said.

In spite of its international legal obligations, Armenia by committing the Khojaly genocide breached international law and fundamental documents on human rights including the Convention on the Prevention and Punishment of the Crime of Genocide. Namely, Armenia carried out acts of physical annihilation of Khojaly residents for racial, ethnic, national, and religious purposes, according to Hajiyev.

Hajiyev noted that Armenia must admit to bearing international legal responsibility for the Khojaly genocide and apologize to the Azerbaijani people. The criminals must be punished.