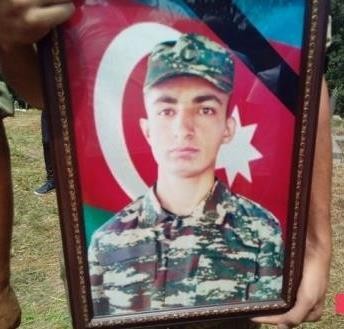 Soldier of the Azerbaijani Armed Forces, Vusal Aliyev, 20, who was killed by a sniper shot from the Armenian side, has been laid to rest in Lerik district’s Noda village.

The funeral was attended by the district officials, servicemen, locals and the martyr’s relatives.

The funeral attendees spoke of the martyr’s bravery, mentioning all martyrs will live in hearts and memory of the people forever.

Soldiers fired three rifle volleys over the grave and the martyred soldier was laid to rest.

The Azerbaijani national flag covering the coffin was presented to the bereaved father.