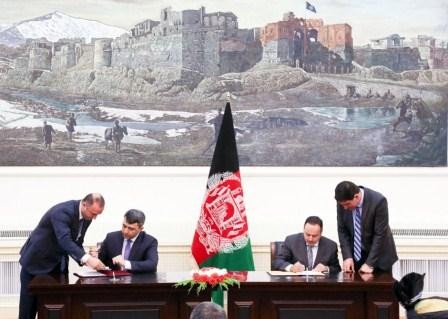 A Memorandum of Understanding (MoU) on the establishment of the mechanism for progressive public service delivery was signed between the State Agency for Public Services and Social Innovations under the President of the Republic of Azerbaijan (ASAN) and the Ministry of Finance of the Republic of Afghanistan at the Afghan President's Palace. The ceremony was held as part of the visit of the Azerbaijani delegation led by chairman of ASAN Inam Karimov to Afghanistan.

The document aims to establish the mechanism of public service delivery in Afghanistan on the basis of Azerbaijan's "ASAN Xidmet" (ASAN Service) model.

The signing ceremony brought together the Afghan ministers, MPs and other high-ranking officials.

Following the ceremony a press conference was held.

Addressing the event, Karimov highlighted friendship and partnership between Azerbaijan and Afghanistan. He hailed the recent successful reforms carried out by the Azerbaijani President Ilham Aliyev in economic, social and public administration areas and the activities of "ASAN Xidmet", which he described as “part of these reforms”.

Praising their choice of Azerbaijani model in public service delivery, the Afghan Finance Minister Eklil Ahmad Hakimi expressed his confidence that it would be successfully implemented in the country. He noted that the organization with the same name (asan.gov.af) had already been established in Afghanistan.

The officials who signed the MoU then had an audience with President of the Islamic Republic of Afghanistan Mohammad Ashraf Ghani at the Presidential Palace.