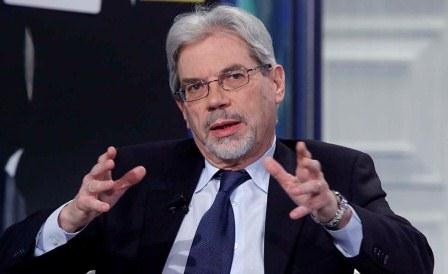 The Southern Gas Corridor project is of strategic importance for Italy, for the whole Europe and Azerbaijan itself, State Secretary of the Council of Ministers of Italy Claudio De Vincenti said in an exclusive interview with Trend in Baku Feb. 29.

De Vincenti is on a visit to Baku to participate in the second meeting of ministers of the Southern Gas Corridor Advisory Council.

He said it is a very useful and important meeting, adding that representatives of all countries interested in the Southern Gas Corridor project, are participating in this event.

“Azerbaijan has a key role in Europe’s energy security,” he said, adding that diversification of sources is the priority and from this point of view, the priority number one is the connection with the Azerbaijan gas.

The Southern Gas Corridor is one of the priority energy projects for EU. It envisages transportation of 10 billion cubic meters of Azerbaijani gas from the Caspian Sea to Europe through Georgia and Turkey.