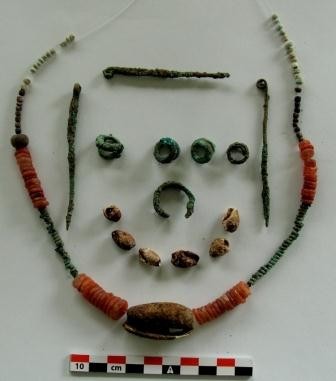 As part of their continuing exploration of monuments from the Neolithic and the bronze ages in the territory of Gabala district, Azerbaijan, the ANAS expedition “Ancient Gabala” is working at the site of an ancient settlement called Galayeri (Leylatepe archeological culture) in the territory of the Gabala International Airport, the ANAS Institute of Archeology and Ethnography told APA.

To date, thousands of artifacts made of clay, stones, metal, and bones have been unearthed at the site, which has a history dating back to the first half of the 4th millennium B.C.


Archeologists say a variety of potteries found here were made by potter’s wheel, as in other Middle East cultures.


ANAS deputy director Najaf Museyibli, who is leading the expedition, says another fascinating fact is the discovery of an ancient catacomb at the site.

“The archeological expedition has made another sensational discovery in Galayeri; an ancient catacomb has been found here,” he stressed.

According to Museyibli, the catacomb dates back to the same period when the site was first settled—some 6,000 years ago—and is more ancient than any other catacomb in Europe and the Caucasus.


The expedition also found in Gabal’s Dizakhli village a human skeleton buried with more than a hundred jewelries and 30 potteries next to it.


Museyibli said a comparison of these artifacts with others has allowed them to specify the distinct features of Eastern Caucasus culture which covered the areas of Shirvan, Guba-Khachmaz, Southern Dagestan, especially the areas surrounding Derbent.