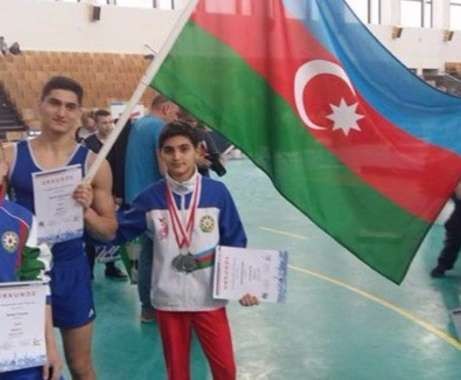 The 21st edition of the prestigious "International Junior Team Cup 2016" in Artistic Gymnastics was held in the German capital Berlin on April 8-9.

Some 38 teams from 23 countries participated at the event.

Azerbaijan, which was represented by young gymnasts including Murad Agharzayev, Aghamurad Gahramanov, Samad Mammadli and Sergiy Onbysh won two medals at the competition.

Except Murad Agharzayev, the other three gymnasts made a debut on the international arena.

Samad, having performed within age category of gymnasts born in 2002, won two silver medals on Floor exercises and in the final on Pommel Horse.

He also took the 4th place in the final exercise on Horizontal Bar. The young gymnast stopped on the 6th position in the final on Rings and Vault.

Aghamurad and Sergiy competed in the age category of gymnasts born in 2001. Sergiy reached the final on Vault and took the 5th place, while Aghamurad ranked 5th in the final exercises on Parallel Bars.

Murad, who represented the country in an elder age group, performed in the final on Vault and also took the 5th place.

2015 was a very successful year for the national gymnastics, as the country gained 157 medals during last year. The Azerbaijan Gymnastics Federation was acknowledged to be the best federation and the iconic 9,000-seat National Gymnastics Arena, designed to host all gymnastics disciplines declared the best Arena by the Azerbaijan Youth and Sports Ministry in the country last year.