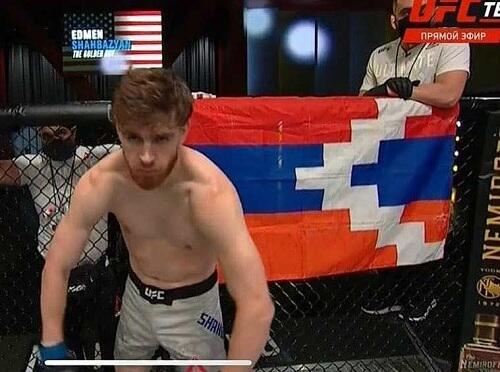 Armenian athlete Edmen Shahbazyan, who went to the last fight in the UFC with the "flag" of the so-called "NKR", was punished.

Axar.az reports citing Sportal.az that organizers have sentenced a 22-year-old athlete representing the United States. In addition, the president of the organization Dana White expelled from the UFC a 20-year-old employee who allowed the so-called flag to enter the ring.

The big fights in the UFC are sponsored by Reebok. Athletes are only required to enter the ring with the company's logo and logo. Reebok immediately stopped cooperating with the provocative Armenian and refused to finance it.

The Armenian athlete and his coaches apologized to the UFC and said they made a mistake.

The Ministry of Foreign Affairs of Azerbaijan addressed an appeal to the UFC leadership.

Edmen Shahbazyan lost to Derek Brunson in Las Vegas and was hospitalized.