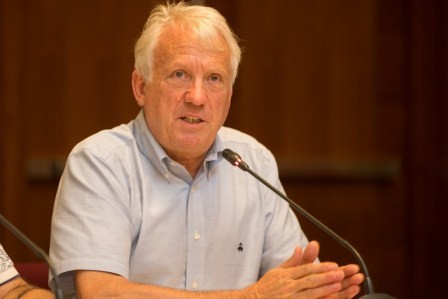 FIA Formula One Race Director and Safety Delegate, Charlie Whiting, returned to Baku to inspect the readiness of the Baku City Circuit ahead of the 2016 FORMULA 1 GRAND PRIX OF EUROPE, to be held in Baku, Azerbaijan on the weekend of June 17th-19th.

The inspection, taking place just a few weeks after Whiting and his team last visited the circuit, once again evaluated the quality of the track and its surrounding facilities to ensure it is fit for the purpose of hosting a Formula 1 Grand Prix street race. After carrying out a thorough inspection, Whiting delivered a hugely positive endorsement of the fledgling street circuit:

"I was very encouraged by the huge amount of work that has been done since my last visit. I'm pleasantly surprised to see just how much of the circuit is complete. We spent 4 or 5 hours walking around the track examining every bit of it. In general, I must say that the standards of the circuit built so far are absolutely superb and personally I am getting quite excited about the idea of coming here to race in a week's time."
Baku City Circuit (BCC) has successfully completed most of the necessary preparatory work for the 2016 Formula 1 Grand Prix of Europe and has worked non-stop to ensure that every last detail is in place before June 16th.

The construction of the Pit Building - located in the Paddock area by the Government Building - as well as the on-site offices for the International Automobile Federation (FIA), Formula One Management (FOM), Baku City Circuit, F1 teams and other event staff, has already been finalized. The installation of technical equipment in these buildings is currently entering its final phase.

The asphalt layer that covers Baku City Circuit is complete, with the final layer having been applied already.

Almost 95% of the overall works related to the installation of safety barriers around the circuit have also been completed. To ensure the smooth and safe passage for residents during the race week, safety barriers will be installed in selected areas over the coming days.Between June 14-16, the roads encompassed by Baku City Circuit will be entirely closed to traffic to ensure the completion of the final preparatory works, including the installation of safety barriers, the application of paint in accordance with the race requirements as well as other important and necessary works.

Eight out of the nine grandstands around Baku City Circuit have already been set up. The construction of the main Absheron grandstand, with a capacity of 5000 seats, will be completed this week.

Furthermore, construction works at the Formula 1 Village, located along the seaside boulevard, are proceeding at full speed.