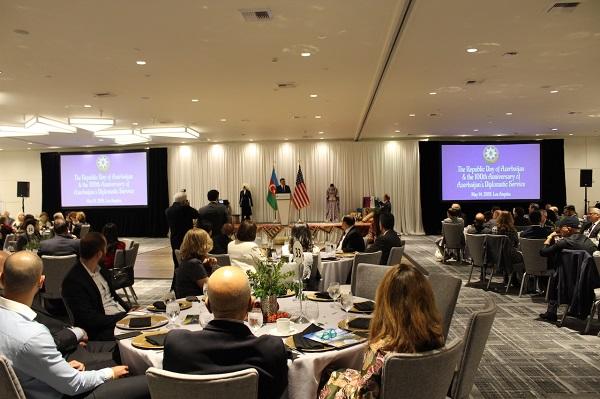 An event dedicated to the Republic Day of Azerbaijan and the 100th anniversary of Azerbaijan’s Diplomatic Service was held in Los Angeles.

Axar.az reports that hosted by the Consulate General of Azerbaijan in Los Angeles, the event was attended by over 400 guests, including representatives of the U.S. State Department, Consuls General, and Honorary Consuls, representatives of elected officials, faith leaders, media representatives, scientists, members of the local Azerbaijani community, as well as leaders of Jewish, Turkish, Pakistani, Iranian, Korean, Hispanic and other communities.

Consul General of Azerbaijan in Los Angeles and Dean of the Los Angeles Consular Corps Nasimi Aghayev welcomed the guests, stating that 101 years ago on May 28, 1918, the people of Azerbaijan established the very first Republic in their history - the Azerbaijan Democratic Republic. He further noted that it was the first ever secular democracy among all Muslim nations and the first majority-Muslim nation to grant women the right to vote. He stated that this year also marks the 100th anniversary of Azerbaijan’s diplomatic service and the first diplomatic encounter between Azerbaijan and United States and that the two countries have built a strategic partnership based on shared values, interests and vision for the future.

Aghayev stressed that today “under the visionary leadership of President Ilham Aliyev, Azerbaijan has become the largest economy in the region, with one of the most competitive economies in the world, implementing energy and transportation projects of global importance like the newly launched railroad connecting Asia with Europe or vastly contributing to the energy security of European nations”. He mentioned that “Azerbaijan has also become a place where Muslims, Christians, Jews, Baha'is, and other faiths continue to live peacefully together, in dignity, harmony and mutual respect”. Consul General Aghayev concluded: “We are all proud that 101 years later we are celebrating the anniversary of our first Republic as a free, independent and confident nation again that has never been as strong and prosperous as it is today. As President Ilham Aliyev recently said, the founding fathers of our first Republic would have been proud to see present-day Azerbaijan”.

It was further noted May 28 was proclaimed as ‘Azerbaijan National Day’ in the cities of San Diego, Irvine, Santa Fe, and Albuquerque. Los Angeles Mayor Eric Garcetti also sent a certificate of congratulations.

Following the speeches, masterful Azerbaijani dance performances were presented by Ramin Eldarov and Laman Musayeva. Also, the performance on the free-standing ladder by the famous Azerbaijani acrobat, finalist of “America’s Got Talent” show and winner of 2016 Guinness World Records Uzeyer Novruzov mesmerized the audience and was received with much applause. The guests were also treated to authentic Azerbaijani dishes and pastries.