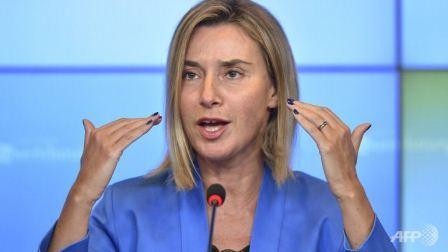 She made the remarks during the meeting with Azerbaijan’s Foreign Minister Elmar Mammadyarov during the 71st session of the UN General Assembly.

During the meeting, the parties discussed the current status of the bilateral relations, exchanged views on their prospects and expressed interest in developing those relations, said Azerbaijan’s Foreign Ministry.

The parties expressed readiness to start the talks to bring the Azerbaijani-EU partnership to a qualitatively new level and noted that there is a great potential for cooperation in energy, transportation and agrarian spheres.

Mogherini pointed out that the EU is interested in the peaceful settlement of the Armenia-Azerbaijan Nagorno-Karabakh conflict.

Azerbaijan’s foreign minister briefed Mogherini about the situation in the process of settlement of the Nagorno-Karabakh conflict.

Mammadyarov noted that the continuing occupation of Azerbaijani territories by Armenia and the destructive and provocative policy pursued by this country harms the restoration of peace and stability in the region.