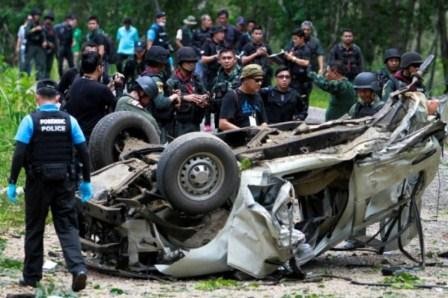 A homemade bomb planted in a road killed three police officers Friday in insurgency-plagued southern Thailand, officials said, according to the AP.

Pongsak Khaonuan, a police investigator in Yala province, said the bomb was detonated as the officers' car passed over it, wrecking the vehicle and killing the three instantly. Another officer was taken to a hospital with injuries. Police said they believe Muslim separatist insurgents were behind the attack.

More than 6,000 people have been killed since the insurgency flared in 2004 in Thailand's three southernmost provinces, the only ones with Muslim majorities in the predominantly Buddhist country.