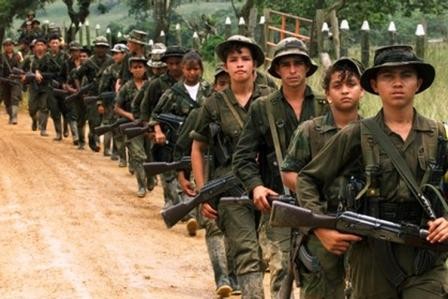 "War is always more costly than peace," he said in an interview with the BBC.
Mr Santos and Farc leader Timoleon Jimenez, known as Timochenko, will sign a historic peace deal later on Monday.

But it will take a long time for Colombian society to recover from more than five decades of conflict, he said.

The Farc will be relaunched as a political party as part of the deal, which is due to be put to Colombian voters in a popular vote on 2 October.

"We could have grown between 2% and 3% more per year for the past 23 years," Mr Santos told the BBC's Lyse Doucet, adding that the conflict had also had a profound impact on Colombian society.

"We have even lost our compassion, which is the ability to feel some kind of pain for others.

"A country at war for 50 years is a country that has destroyed many of its values," said President Santos.

The peace agreement was sealed after nearly four years of talks, which were held in the Cuban capital, Havana.

"The signature of the deal is simply the end of the conflict. Then the hard work starts: reconstructing our country," he said.

Senior members of the Farc (Revolutionary Armed Forces of Colombia) voted unanimously to ratify the deal on the last day of their conference on Friday.

Mr Santos said he was "very, very confident" that most Colombians would vote in favour of the deal.

"The latest polls say that between 65% and 70% of the people approve of the peace process," he said
"Peace is the victory for everybody."

The Colombian president said that if the agreement was to be rejected in the popular vote, the conflict would start again.

"We will go back six years and continue the war with the Farc. That's plan B," he said.

What's in the deal?

The Farc now has 180 days to disarm and move its estimated 7,500 fighters into disarmament zones set up by the UN.

An amnesty will be granted for "political crimes" but this does not cover massacres, torture or rape.

The Farc has already agreed to stop drug production in areas under its control and the government has pledged to help farmers earn a living without growing illicit crops.

The Farc will become a political party, allocated 10 seats in the 268-member Congress.

Both sides have pledged to provide land, loans and basic services to impoverished rural areas.

ELN leaders have publicly expressed their wish to engage in their own peace process with the Colombian government.

Mr Santos said the deal with the Farc was fair and that it made those who committed war crimes accountable.

The rebels have agreed to lay down their weapons in a process that will be verified by the United Nations.

"Maybe some of them will hide some guns. That's a natural thing that happens in these peace processes," he said.

"But they are going to give up the majority of their weapons."

According to the latest official figures, more than 260,000 people have died in the conflict. More than six million people have been internally displaced.

A final peace deal between the two sides was announced on 24 August in the Cuban capital, Havana, where the negotiations took place.

1964: Set up as armed wing of Communist Party

2002: At its height, it had an army of 20,000 fighters controlling up to a third of the country. Senator Ingrid Betancourt kidnapped and held for six years along with 14 other hostages

2008: The Farc suffers a series of defeats in its worst year

Mr Santos, Farc leaders and heads of state from around the world, have been arriving in the historic port city of Cartagena for the signature of the peace accord on Monday evening.

If the agreement is approved in next Sunday's popular vote, the Farc will become a political party and join the legal political process from next year.

"But when you vote yes, they will disappear. They will cease to exist as a dark group."

Mr Santos said that as part of the peace agreement the Farc had agreed to cut all links with drug trafficking and help farmers shift from the production of coca leaves to legal crops.