Why is India's Modi going on the offensive? 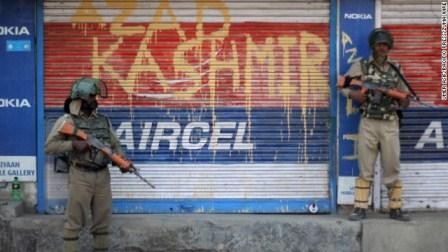 India's reported "surgical strike" across the border into Pakistani-controlled Kashmir on Wednesday brings India-Pakistan relations to their lowest point in almost a decade.

But it will be celebrated not just by the Hindu nationalist supporters of Prime Minister Narendra Modi, but also by many other Indians who believe that their country has remained passive for too long in the face of repeated terror attacks by groups assisted and sheltered by the Pakistan army's powerful intelligence services.

In truth, the strike itself does not represent a radical new policy. India conducted local cross-border raids through the 1990s and 2000s, usually as reprisals for particular attacks. But this high-altitude, tit-for-tat war on the Line of Control, which divides Indian and Pakistani-controlled parts of Kashmir, was largely unknown to the Indian public, who grew frustrated at their government's apparent inaction.

India's decision to go public in dramatic fashion is therefore a break with the past.

Why did Modi take this step?

Domestic politics is part of the answer. After a terrorist attack earlier this month that killed 18 soldiers in Kashmir, a senior leader of Modi's party, the Bharatiya Janata Party, demanded severe retaliation: "Pakistan is a terrorist state," tweeted Modi's home minister, "and it should be identified and isolated as such."Retired generals, diplomats and news anchors demanded that Pakistan be given a "bloody nose."

This intense public pressure likely influenced Modi's decision both to strike and to go public. He will reap political rewards for doing so. Even the opposition Congress Party, which usually attacks nearly everything the government does, expressed its approval of "actions to protect country's security."

Modi's supporters portray the raid as yet another example of his willingness to assert Indian power across the region, from giving attack helicopters to Afghanistan to sending troops across the border into Myanmar to attack insurgent camps.

Beyond politics, Modi's government is eager to show that it won't be business as usual. Modi tried to cooperate with Pakistan after an earlier terrorist attack on an airbase in January, but Pakistan made no effort to curb the group responsible and New Delhi grew disillusioned.

This is a way of signaling that New Delhi's patience has run out, and that India might escalate further next time.

At the same time, it should be remembered that this was a relatively modest operation. It was restricted to disputed territory, allowing India to claim it remained within what it considers to be its own soil. It also deliberately focused on militants, rather than Pakistani troops, which would have been more provocative.
Overall, India remains constrained in what it can do to Pakistan for fear of a larger war, the associated nuclear risks, and the impact on India's own diplomatic and economic well-being.

However, the strike is only one part of a broader set of policies intended to punish Pakistan. India scored a major success in persuading Bangladesh, Bhutan and Nepal to stay away from a regional conference, the South Asian Association of Regional Cooperation (SAARC), that was due to be held in Islamabad in November.
Pakistan has initially denied that India crossed the border at all, and this policy may help it save it face. But we are likely to see tensions grow, and the Pakistan army may retaliate with intensified shelling, attacks on Indian troops in Kashmir or terrorist attacks elsewhere in India or on Indian interests in Afghanistan.

The present Pakistan army chief is due to retire in a month, and the views of his successor -- technically chosen by the elected government -- will also be of great importance. The more Modi gloats, the more Pakistan will be compelled to show it remains unbowed.

This dynamic could result in a rocky few months in South Asia.