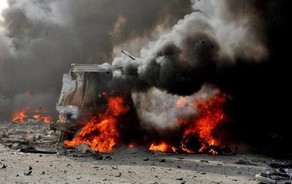 A suicide bomber detonated himself in the al-Asi square in the Syrian city of Hama, killing and wounding civilians.

A terrorist with a suicide bomber belt detonated the explosive on the al-Asi square in Hama. There are victims and the wounded, the numbers are being clarified," the police said.

Meanwhile, a Hama police source told Syrian state news agency SANA that a second suicide bomber blew himself up just 15 minutes after the suicide bomber attack in the al-Asi square.