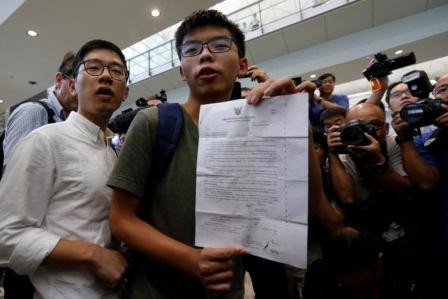 Thailand on Wednesday barred entry to a Hong Kong student activist who helped organize pro-democracy protests in the Chinese-ruled city in 2014, with a newspaper saying he had been "blacklisted" at China's request.

Bespectacled Joshua Wong, 19, was detained in Bangkok where he had been invited to speak at two universities about Hong Kong's "Umbrella Movement" street protests and on setting up his political party, Demosisto.

He was later put on a plane back to Hong Kong.

The protests in Hong Kong, the former British colony which returned to Chinese rule in 1997, presented Communist Party rulers in Beijing with one of their biggest political headaches in decades.

Wong was given 80 hours of community service by a Hong Kong court in August on a charge of unlawful assembly for taking part in a sit-in at the height of the protests in the Asian financial hub.

Thailand has been ruled by a junta since a 2014 coup which was widely condemned by the West. Since then, the generals running Thailand have forged closer ties with Beijing.

The Nation newspaper quoted a deputy commander of airport immigration police as Wong had been blacklisted "as requested by China".

Col Pruthipong Prayoonsiri was quoted as saying China has sent a request "to seek cooperation to deny" Wong entry.

"As a result, the Immigration Bureau blacklisted him and held him for deportation. When officers informed him, Joshua Wong did not oppose it," Pruthipong was quoted as saying.

Wong arrived in Bangkok just before midnight local time on Tuesday and arrived back in Hong Kong on Wednesday afternoon.

Wong, speaking to journalists with recently elected lawmaker Nathan Law, said he had been told he had been blacklisted.

Wearing a green khaki shirt, Wong said he wasn’t sure if it was the authorities or customs who had told him. He said the authorities' English was not that good.

Wong wrote on his Facebook page that he had been illegally detained by Thai police and customs. He was not allowed to contact anyone, had his passport confiscated and was kept inside the airport detention center alone.

"These past 10 hours or so have been very scary," he said.

China's Foreign Ministry, when asked about Wong's detention, said it had "noticed the relevant reports".

"China respects Thailand's exercise of immigration control according to the law," it said in an email.

Wong was denied entry by Malaysia in May 2015 when he was due to give a series of talks on democracy in China.

Wong was invited by Chulalongkorn University's Faculty of Political Science to speak on the 40th anniversary of the bloody crackdown by the Thai army on student protesters.

Demosisto also called for his release.

Thailand, Southeast Asia's second-biggest economy, is slowly recovering from the events of 2014, when months of street protests and the coup almost brought economic activity to a standstill.

Since then, the military has clamped down on dissent and banned political protests.