New weapon will shoot drones out of the sky (Video) 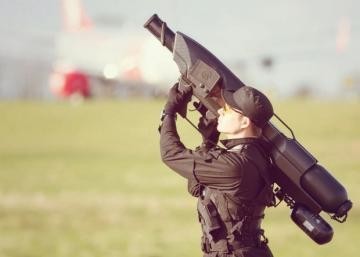 The SkyWall 100 is one of the latest devices promising to protect the world from the impending drone takeover. It’s essentially a smart bazooka that fires a canister filled with a net at drones 100 meters away.

An operator targets the drone and fires a canister that contains a large net that gets tangled in the drone’s rotors. A parachute then delivers the drone back to earth in a civilized manner. “OpenWorks Engineering” is the company behind the device and is marketing the device to protect sensitive events and buildings. The shoulder-mounted device uses an intelligent system that locks onto a drone, assisting the operator in firing and targeting.

The scope identifies and then calculates a firing pattern based on the drone’s distance and vector. The technology sounds a lot like the systems in TrackingPoint’s smart guns that lets anyone get a bulls eye on a target hundreds of meters away.

The company is also announcing the SkyWall 200, a semi-permanent launcher mounted on a tripod and offers increased range over the SkyWall 100. The SkyWall 300 is a turret-like device designed to be permanently installed. The company says tracking and detection is built into the 300 and operators can control the device remotely.

The device is capable to re-energize during 8 seconds and it weight is 10 kg.

In addition, the company has not released the price for their systems yet but says it will be available by the end of the year.