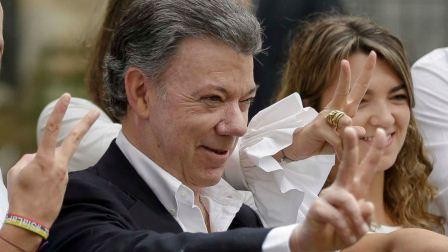 Nobel Peace Prize winner and Colombian President Juan Manuel Santos has extended a ceasefire with FARC rebels in a bid to keep alive his nation's hopes for an end to decades of strife.

The ceasefire was due to expire at the end of October. President Santos has extended it until the end of the year as he tries to breathe new life into a peace deal that was narrowly rejected by Colombians in a referendum earlier this month.

"I have made the decision to extend the bilateral ceasefire until the December 31," Santos said, according to state-run news agency reports.

Santos, who won this year's Nobel Peace Prize for his efforts to cement an agreement, is attempting to end the rebel group's bloody, 52-year battle against the state.

An estimated 220,000 people have been killed in the conflict which has brought terror, misery and death to generations of Colombians -- and displaced as many as 5 million people.

The FARC also hijacked planes and made millions trafficking cocaine, as well as forcing children to become soldiers in its war.

Last month, after lengthy talks, rebel leaders signed a peace accord with the government which was then narrowly rejected by the people of Colombia in a referendum.

After that defeat, Santos pledged to press ahead with peace efforts.

"Tomorrow we will get all our political parties together to continue dialogues and finding alternatives for peace. I will not give up, I will continue to fight for peace," he said.

Santos said in a televised address Thursday that his decision to extend the ceasefire had come at the request of students he met with earlier in the day, the state-run Canal Institucional news agency reported.

"In the military, in the guerrillas, there are young people who are waiting, diligently waiting, to see what happens, hoping to never have to shoot again," he said.

He argued that the deal offered impunity to FARC fighters and accused his successor, Santos, of conceding to

FARC leader Rodrigo Londoño Echeverri, said the referendum result would not sway former rebels from the path of peace.