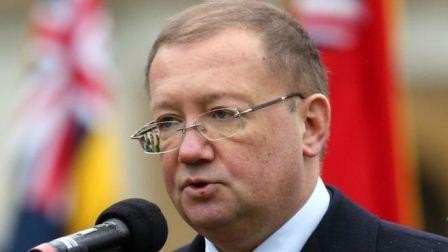 The Russian ambassador to the UK has accused the British government of delaying the granting of visas to staff at its embassy in London.

Alexander Yakovenko said the embassy was "shrinking" and questioned whether the UK wanted "an adequate Russian diplomatic presence".

He also criticised the prime minister and foreign secretary for giving what he said were "anti-Russian statements".

The Foreign Office said there was no policy to delay visas.

Mr Yakovenko said Russia did not have enough diplomatic staff in London because as people returned home or went on to other postings, visas for their replacements were not being issued.

"The embassy is shrinking and if it continues the embassy will be reduced further. People cannot be replaced because the visas are not being issued," he said.

"I hope this problem will be resolved under present government."

He added: "Here in London, we simply do not understand the strategy of this country on visa issues."

Mr Yakovenko's comments come amid public clashes between the UK and Russia over Syria, Ukraine and the killing of former KGB agent Alexander Litvinenko in London in 2006.

Earlier this month, Foreign Secretary Boris Johnson told MPs Russia risked becoming a pariah nation over its involvement in bombing the Syrian city of Aleppo and urged protesters to demonstrate outside its embassy.
And Prime Minister Theresa May this week urged European leaders to send a "robust united message" to Moscow over the bombing campaign.

Also on Friday, there was further attention on the relationship between the countries as two British warships shadowed an aircraft carrier and other Russian naval ships as they passed the UK on their way to Syria.

A Foreign Office spokesman said: "We have made clear to the Russians that the queues need to be cleared on both sides, and they have agreed work with us on this.

"We regularly discuss the visa exchange process with the Russians at official level and this requires both the UK and Russia to work together to ensure the effective operation of our respective embassies."