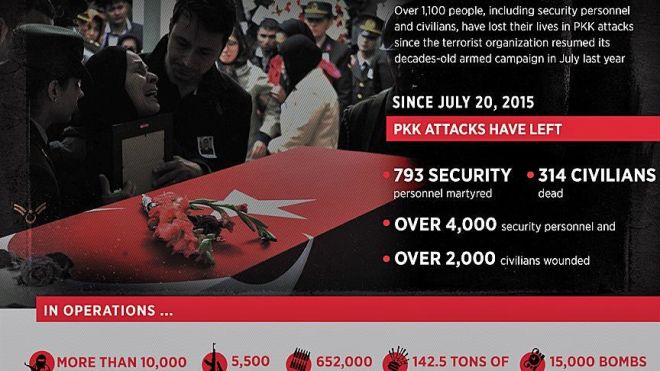 Over 1,100 people, including security personnel and civilians, have lost their lives in the PKK attacks since the terrorist organization resumed its decades-old armed campaign in July last year, a security source said Thursday.

PKK terrorists have martyred 793 members of security forces including soldiers, police officers, and village guards between Jul. 20, 2015 and Nov. 9, 2016, the source said on condition of anonymity due to restrictions on talking to the media.

A total of 314 civilians have lost their lives over the same period.

Turkish security forces have so far "neutralized" more than 10,000 PKK terrorists in operations inside and outside of the country, while PKK attacks have left more than 4,000 security personnel, and over 2,000 civilians wounded, the source added.

Meanwhile, some 5,500 weapons, 652,000 bullets, 142.5 tons of explosives and 15,000 bombs have been seized in the ongoing operations in the eastern and southeastern regions of the country.

PKK terrorists have not only been targeting security forces, but civilians as well.

A total of 54 civilians including 4 police officers died Sept. 12 when a bomb-laden vehicle exploded near a police station in front of the ruling Justice and Development (AK) Party building in the eastern Van province.

The attack came on the first day of Eid al-Adha, or the feast of sacrifice -- one of the two most important holidays in the Islamic calendar.

On Nov. 4, 11 people including two police officers died during a deadly attack targeting a police building in central Diyarbakir. More than 100 people were wounded in the blast targeting the southeastern province.

On Aug. 18, three police officers were martyred in a PKK car-bomb attack on a police station in the eastern Elazig province. The attack left more than 100 people, including civilians, injured.

Naci Adiyaman, head of the AK Party’s youth branch in Beytussebap, Sirnak province in Turkey’s southeast, was killed after PKK terrorists kidnapped him on Aug. 13 this year.

Another AK Party figure -- Ahmet Budak, a former parliamentary candidate in Hakkari province -- was killed outside his home on Sept. 14.

Most recently, Salih Guven, the chief of Boluklu village in Bitlis' Hizan district was found shot dead Wednesday after having been abducted by the PKK 45 days ago in the eastern province.

The PKK is listed as a terrorist organization by Turkey, the U.S. and the EU.