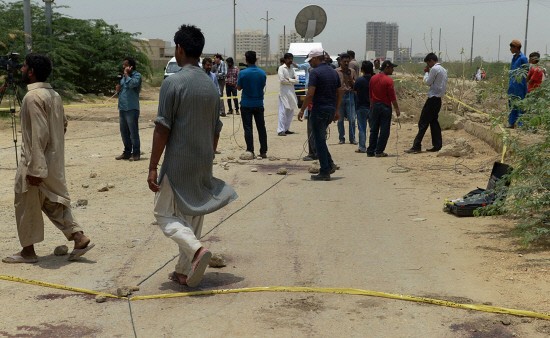 The shooting took place in the North Nazimabad neighborhood of the sprawling metropolis of more than 18 million people, where sectarian, ethnic and political violence is common.

Lashkar-e-Jhangvi's Al Alami faction, which targets Shi'ites and Pakistan's security forces, killed more than 60 police cadets in the southwestern city of Quetta on Monday in an attack in conjunction with Islamic State.

But it said it carried out this attack on its own.

"Lashkar-e-Jhangvi Al Alami accepts responsibility for those killed in this attack, and we announce that there is no room for the enemies of the companions of the Prophet Muhammad in Pakistan," said Ali bin Sufyan, the group's spokesperson, in a statement.

Violence and crime has dropped significantly in Karachi since the launch of a paramilitary operation in the city three years ago, but targeted attacks still occur frequently.

Shi'ite Muslims make up about 20 percent of Pakistan's 190 million people, and sectarian attacks against them - including bombings and targeted attacks - have become increasingly common in recent years.