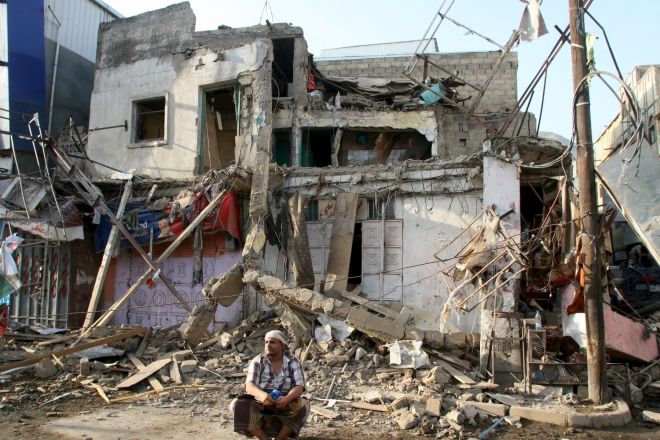 More than 20 civilians were killed in the shelling of a busy market in the war-torn Yemeni city of Taiz, including a member of an international aid group, the group and medical officials said on Friday.

Doctors Without Borders, known by the French acronym MSF, said that its hospitals received a total of 21 victims on Friday, including a group worker, and 75 wounded, with many suffering from fractures, severe burns, open wounds and lacerations, as well as internal injuries.

"Sadly, one of our colleagues who works as a watchman at the MSF trauma center in Taiz was killed whilst he was off duty when a blast hit a local market in the neighborhood," said Djoen Besselink, MSF's Head of Mission in Yemen.

"Another heartbreaking example of a hard-working citizen affected by this ongoing conflict."

Taiz has been one of the worst-hit cities in Yemen's conflict where fighting between Shiite rebels, known as the Houthis, and forces loyal to the internationally-recognized government escalated this week. The pro-government forces are backed by a Saudi-led coalition, which launched an air campaign last year to dislodge the Houthis from areas under their control, including the capital Sanaa.

A U.S.-brokered ceasefire and peace deal has been backed by the Houthis but rejected by the government for giving the rebels a share of power while sidelining the Houthis' rival, exiled President Abed-Rabbo Mansour Hadi.

Witnesses said the attack on the market took place on Thursday and in an area under rebel control. It was not immediately clear who fired at the market.

The officials and residents spoke on condition of anonymity because they were not authorized to speak to reporters.

Since April of last year, Taiz has been divided, with the eastern and mountain-top districts under rebel control and the city center controlled by fighters backed by the coalition.

Over the past days, government forces have pushed the Houthis out of several districts of the city, known for its cultural heritage.

MSF also said that since May last year, the group has treated more than 10,000 war-wounded patients in Taiz alone.