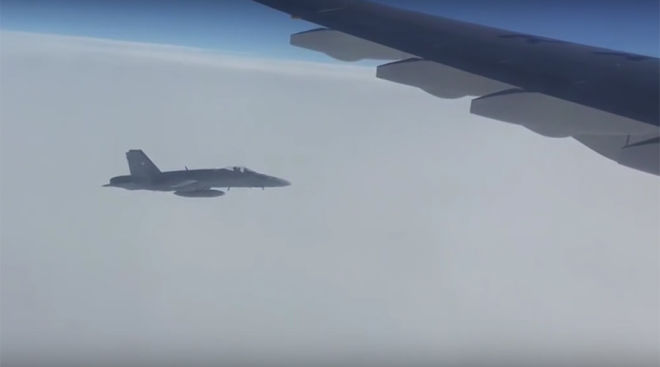 A plane carrying members of the Russian press to the APEC summit in Peru was intercepted and tracked by Swiss fighter jets as soon as it entered the country’s airspace, journalists on board said.

The video from aboard the Russian plane was posted online by one of the passengers, with Swiss military insignias clearly visible on the escorting plane in the footage.

“We’re flying above Switzerland. At some point, the plane with the delegation and the journalists is being blocked from three sides by three fighter jets,” Andrey Kolesnikov, editor-in-chief of Russian Pioneer magazine, wrote on Facebook.

Kolesnikov said that the jets were from the Swiss Air Force, as “the flags at the tails and missiles underneath the wings were clearly visible.”

The jets approached the passenger plane so closely “that one could see the unsmiling faces of the pilots,” he added.

One rash move from any of the pilots could have led to a tragedy, the journalist wrote.

At some point, Kolesnikov said that there were fears that the jets would attempt to force the Russian plane to land.

But after the fighter jets escorted the journalists’ plane for 10 minutes, they pulled away. “When they apparently reached the Swiss border, they withdrew at once. And they did it beautifully, I must say," Kolesnikov wrote.

Kolesnikov called the incident “unprecedented,” also reporting that the plane with the journalists onboard has landed in Lisbon, Portugal, for a scheduled refueling.

However, the captain of the Russian jet calmed the media down, saying that “the practice of escorts of special flights in Swiss airspace [has existed] for a long time and isn’t unique.”

“On this air route, we are regularly accompanied by jets from this country’s Air Force,” the pilot told TASS.

Swiss jets acted in accordance with a preliminary agreement with the Russian side and posed no threat to the Il-96 plane and its passengers, he added.