One killed in helicopter crash in south Russia 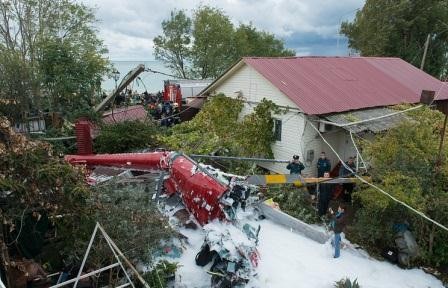 According to updated information, the helicopter fell on a territory near a house and not on a private house.

One person died and six others were injured after a helicopter fell on a territory surrounding a private house in Sochi in south Russia, the regional emergencies services told.

"There were seven people aboard. One died," the source said.

A Eurocopter AS350 belonging to CJSC Yeltsovka has crashed. The helicopter followed the Krasnaya Polyana - Imereti Lowland route and fell on the courtyard of a one-storey private house. No fire followed after the crash, the source said.

The Interior Ministry’s transport department for the Southern Federal District has confirmed the information on the crash specifying that only five people got injured.

"A helicopter has crashed near the village of Vesyoloye in the city of Sochi. One person has died and five have been injured. A check is under way to find the causes of the tragedy," the transport department said.

An investigative team of the Sochi branch of the Interior Ministry’s transport department is working at the scene.