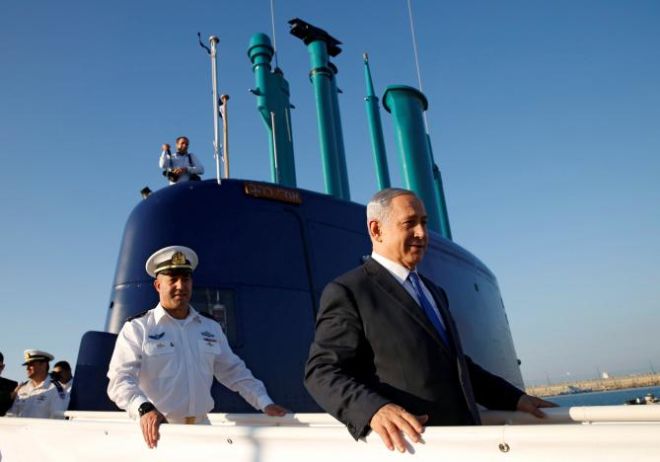 Both Netanyahu and his attorney, David Shimron, have denied any impropriety, and the shipbuilder, ThyssenKrupp Marine Systems, said it has no contractual connection with the lawyer.

Opposition legislators have called for a parliamentary inquiry and the Justice Ministry said late on Sunday that the attorney-general is looking into whether there had been any conflict of interest.

In a statement, the ministry said evidence collected so far did not warrant opening a criminal investigation by police.

Shimron represents Miki Ganor, an Israeli businessman described by the Kiel-based shipyards as its sales partner. A Shimron spokesman told Army Radio on Monday that the lawyer did not discuss the submarine purchase with Netanyahu and looks after a wide range of Ganor's legal interests.

The three submarines, costing about $1.5 billion, are due to replace aging vessels, with delivery only in about another 10 years. Israel currently has a fleet of five German submarines, with a sixth due to go in service around 2018.

With the Israeli media largely focused on Shimron and whether his representation of both Netanyahu and Ganor was ethical, the prime minister, now in his fourth term, did not appear to be in any immediate political danger.

Nor has there been any indication that the deal itself, which Netanyahu, 67, defended in public remarks to his cabinet on Sunday, is in any jeopardy.

The German-supplied submarines are widely believed to be capable of carrying missiles with nuclear warheads and serve as a second-strike deterrent against Iran, should it ever build atomic weapons. Iran has denied ever seeking nuclear arms and Israel has never acknowledged that it has any of its own.

"These are strategic weapons systems that ensure the future, and I tell you, the very existence of the state of Israel for decades to come," Netanyahu told the cabinet at its weekly meeting.

"Increasing the security and strength of the state of Israel is the only consideration that guided me in acquiring the submarines," he said.

Amos Harel, military affairs commentator for the left-wing Haaretz daily, wrote on Monday that even if Netanyahu and Shimron never discussed the submarine issue, there should have been "a Great Wall of China" between the attorney as the prime minister's lawyer and as Ganor's representative.

First elected to Israel's top office two decades ago, Netanyahu has weathered several scandals, including a police investigation and state audits into his family's spending.

A former defense minister, Moshe Yaalon, who was removed by Netanyahu and is now a political rival, has said that the new submarines are surplus to requirements.