"Russia's influence on US is a myth" - Lavrov 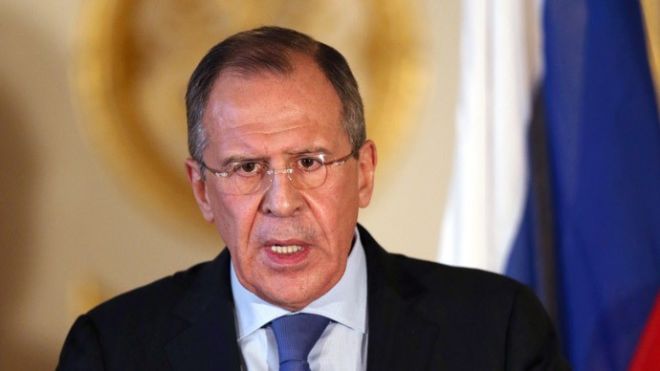 In the immediate aftermath of the victory of Donald Trump at the US presidential elections, American and international media were quick to assume the alleged hacking of the camp of the Democratic rival Hillary Clinton by “Russian hackers” was to blame for the result.

Speaking to the Corriere della sera in an interview published late Wednesday, Lavrov stressed that the only ones who really “helped” Donald Trump to become the 45th US president were American citizens.

“It is symptomatic that the authors of such insinuations, who had inflated Russophobic hysteria in the United States on the eve of the vote, are now playing mum. No promised ‘evidence’ of interference in the electoral process has been presented neither to the American, nor to the international public,” Lavrov said.

In October, Washington officially accused Moscow of staging hacking assaults on US officials and institutions, though not delivering any facts or other information backing the serious statement. Kremlin rebuffed the accusations by the US as “nonsense.” The lack of proof has raised numerous questions as to what exact purposes the allegations might have actually served, Lavrov said.

“This confirms once again that the whole story is from the field of myth-making with a goal to solve the short-term political objectives,” the foreign minister added.

When asked on how Russia is viewing relations with Italy, which is among the countries who imposed sanctions on Moscow over the Ukrainian crisis, Lavrov noted that both sides are suffering from the measures.

Sanctions introduced by the EU against Russia, joined by Italy, and the Russian retaliatory steps had a negative impact on bilateral trade and economic cooperation,” Lavrov said. He also noted that Italy, which used to be the fourth-largest trading partner with Russia, now ranks sixth, while Washington has surpassed Rome and is now placed fifth.

“Thus, Washington, who became the initiator of a large part of the anti-Russian intentions, is not suffering any losses. Perhaps there is something our Italian and in general European partners have to think about,” Lavrov said. Russia, for its part, has already “adjusted” itself to the restrictions with the country’s economy solidly “standing on its feet.”

The Russian foreign minister also noted that “Italian political, business, public circles are increasingly expressing [their] dissatisfaction with the sanctions policies, advocate for the return” of the growing bilateral ties between the two states.

“A number of regions in Italy adopted a resolution calling for the removal of anti-Russian sanctions,” Lavrov said. He added Moscow hopes that Rome will build relations with Russia “based primarily on self-interest.”

“All the rich history of Russian-Italian relations, which are based on years of experience of fruitful cooperation, is an example that with joint efforts we managed to achieve significant results,” Lavrov said.

NATO’s ‘destructive actions’ force Russia to ramp up its military forces
Russia faces no other choice than to react to NATO’s “unprecedented” military build-up in Europe with “corresponding” measures that aim to strengthen Moscow’s defense capabilities and ensure its national security, Lavrov said, referring to NATO’s drills and US military deployments close to Russian borders.

“Near Russian borders, the member countries of the alliance conduct combat exercises, which are quite often provocative. On the pretext of a mythical 'threat from the East' US troops and heavy armaments are deployed in Central and East European countries and new elements of the alliance's command and staff infrastructures emerge," he said, adding that with such actions NATO shows that it has never intended to drop its “years-long destructive policy aimed at achieving military and political domination in European and world affairs and containing Russia.”

Such moves have not gone unnoticed in Moscow, which has been beefing up its own military forces, albeit on home territory, unlike US and other NATO members “which deploy troops to countries bordering Russia and engaging in provocative military demonstrations near our borders,” Lavrov said.

One of these retaliatory measures can be seen in the recent deployment of Iskander ballistic missiles to the western Russian Kaliningrad exclave in October in response to the threat posed by the US cruise missiles recently sent to Poland and Romania. Commenting on the move in November, Kremlin spokesman Dmitry Peskov said that Russia “is doing all that is necessary” against “an aggressive bloc.”

NATO’s Russia strategy has not changed much through the years and is not dependent on the current status of NATO-Russia relations, Lavrov argues.

“Even in 'better days' NATO never stopped advancing its military infrastructure toward Russian borders, including by means of the 'three waves of expansion,' maintained intensive activity in the East European region, and plugged itself into US missile defense programs,” the Russian diplomat pointed out, adding that even before the nuclear deal with Iran was struck, there was “hardly any doubt” about the genuine purpose of US missile defense systems deployment in Europe.

Lavrov also recalled a whole range of aggressive foreign policy steps spearheaded by Washington, such as “the bombing of former Yugoslavia, the invasion of Iraq and the aggression against Libya,” calling these military campaigns “attempts by the alliance and some of its members to attain their own selfish geopolitical aims in defiance of norms and principles of international law.”

Nevertheless, Lavrov stressed that Russia is ready to engage in a dialogue with NATO based “exclusively on the conditions of equality” as stipulated the NATO-Russia Founding Act.