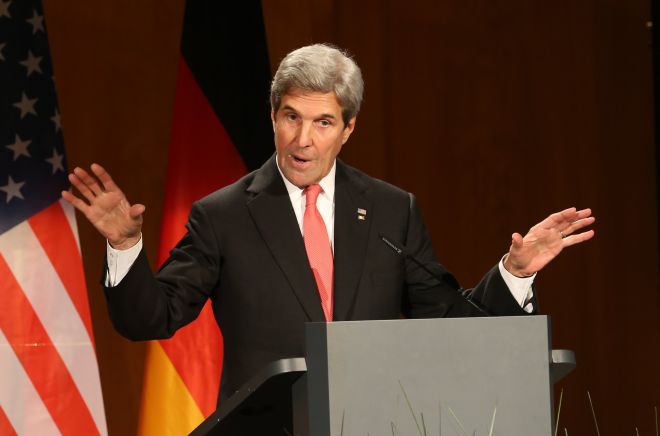 Outgoing US Secretary of State John Kerry has been awarded the Grand Cross of Merit from the Federal Republic of Germany at a ceremony in Berlin on Monday night.

Kerry, who is in Germany as part of a farewell European tour, was presented with the award by German Foreign Minister Frank-Walter Steinmeier in the Weltsaal of the Federal Foreign Office.

"You are not just a colleague, whom I deeply admire, a true statesman - but you have also become a true friend," Steinmeier said to Kerry in a speech.

The Grand Cross is the second-highest of eight honours bestowed by the German government. The highest honour, the Grand Cross Special Class, is reserved for heads of state.

In remarks before presenting Kerry with the award, Steinmeier highlighted the statesman‘s "unshakeable" belief in dialogue, saying "John Kerry is the most tenacious diplomat that I know."

"He gets involved with his counterpart. He doesn‘t let go, he debates every aspect of a conflict in the search for solutions," the German minister said, mentioning Kerry‘s discussions with the then Afghan president Hamid Karzai that would go on for four to five hours.

"You could call an Afghan cricket match brief in comparison," Steinmeier joked.

In addition to the deal to end a putative Iranian nuclear arms programme, Steinmeier numbered among Kerry‘s diplomatic successes the efforts in negotiating a ceasefire in Yemen even after the trauma of November‘s US presidential and legislative elections in which Kerry‘s Democratic party was defeated.

Kerry has long been a close ally of Steinmeier.

Speaking on Sunday, Steinmeier said: "I can‘t remember a time when German and American foreign policy have worked better or more closely together than during the office of John Kerry. He is not only a colleague, but also a friend."

Kerry, 72, has been the US secretary of state since 2013. Among the biggest successes of his tenure was reaching the nuclear accord with Iran.

Kerry spent much of his childhood in Europe and briefly lived in Berlin during the 1950s.