IS shifts defenses to east Mosul 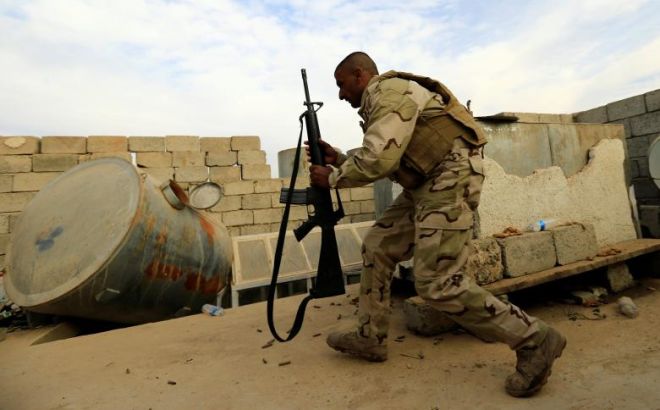 Islamic State has brought its forward defenses from western Mosul towards the east as it fights against Iraqi forces in the battle to liberate the city, a coalition commanding general said.

Iraqi special forces are slowly edging through districts in eastern Mosul, Islamic State's last stronghold in Iraq, where they face suicide attacks, snipers and mortars from militants dug in among the civilian population.

Commanders expected the western half of the city, divided by the Tigris River, to be the tougher battle, but Islamic State - which has controlled the city for two years - appears to be committing its defenses to the east against the Iraqi forces, which are backed by Western-led coalition air strikes.

"What we thought was going to be the strongest defense, now they have already hedged their bets and bought it forward," U.S. Brigadier General Scott Efflandt, a coalition deputy commanding general told Reuters.

"The quality of the enemy we are facing now is markedly declined from a month ago... what they were saving for the west side of the river they are now committing to the east."

Mosul was the largest city under Islamic State control and defeating the militants there would be a major blow to the self-styled caliphate which it declared in Iraq and Syria in 2014 after over-running large parts of both countries.

Fighting has slowed as U.S.-trained Iraqi special forces push into east of the city. The militants still hold three-quarters of Mosul, where around 1 million residents struggle not only with the fighting, but also food and water shortages.

Around 100,000 Iraqi soldiers, security forces, Kurdish fighters and mainly Shi'ite paramilitary forces are participating in the assault that began on Oct. 17.

Efflandt said militants prepared well, using Mosul's machine shops to manufacture their own munitions and armored car bombs. But in one sign of progress, commanders have seen the complexity and deployment of those suicide bombs declining, he said.

Initial estimates of Islamic State numbers in the city ranged from 3,000 to 5,000 militants, but Efflandt said that number was now likely to be closer to 3,000 after six weeks of fighting for Mosul had killed some or forced others to flee.

"They are well rehearsed, well trained, well resourced and they have had ample time to prepare, and that has made it a formidable fight," he said.

Along with the fighting, the presence of civilians throughout the city has hampered the Iraqi progress, they say, reducing options for air strikes and heavy weapons in the densely populated streets.

But French artillery and Iraqi forces on Monday began shelling southern Mosul in preparation for a push from the south to relieve pressure on Iraqi Counter Terrorism Service troops spearheaded the fighting in east Mosul.

"It's a complex urban, Old World city that has two years of deliberate defense. We as the coalition knew that it was going to take a long time," Efflandt said.