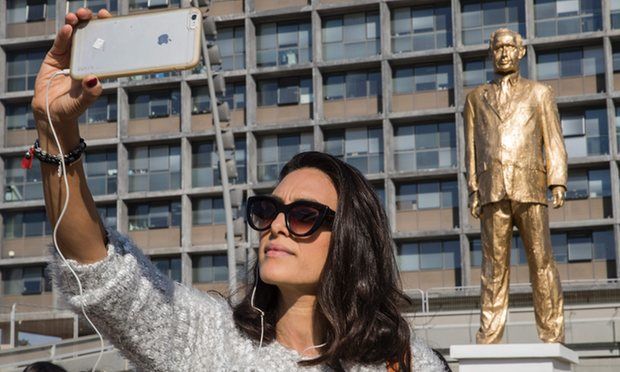 A gilded statue of the Israeli prime minister, Benjamin Netanyahu, erected in a Tel Aviv square and dubbed “King Bibi” by its guerrilla-artist creator, has caused bemusement from passersby and condemnation from the country’s culture minister.

Sculptor Itay Zaliet told reporters on Tuesday he placed the 13ft effigy on a white pedestal in Rabin Square, adjacent to the city hall, to test the limits of freedom of expression in Israel.

The Israeli government and artists have been locked in a so-called “culture war” over steps by the culture minister, Miri Regev, to withhold state funds from institutions that do not express loyalty to the state.

In a Facebook post after the sculpture was erected, Regev called it an “expression of hatred towards Netanyahu” that represented an elite class “whose only golden calf is the hatred of Netanyahu”.

Tel Aviv municipal officials ordered Zaliet to remove the statue and said they would take it away and fine him if he refused.

Morning commuters quickly gathered to take photographs and debate whether the statue should be seen as mockery of Netanyahu or homage to the rightwing prime minister, now in his fourth term and known by his childhood nickname “Bibi”.

One woman bowed down in jest in front of the statue, which Zaliet said took him three months to sculpt.

“In the social media, there have been tens of thousands of comments about ‘King Bibi’,” Zaliet said on Army Radio when asked what had inspired him to create the statue.

“I simply made it a reality and put it in its deserved place, the Kings of Israel Square,” he said, referring to the plaza’s name before it was changed to honour Yitzhak Rabin, the Israeli prime minister assassinated by an ultranationalist Jew during a peace rally in 1995.

One passerby, Nina Lobel, said the portrayal of Netanyahu was “horrendous” and that the artist had wanted “to show him as a dictator”.

Netanyahu and his wife Sara have attracted legal scrutiny and frequent headlines over whether state funds have been used to support what critics decry as their lavish lifestyle.

Both have denied any misuse of taxpayers’ money.