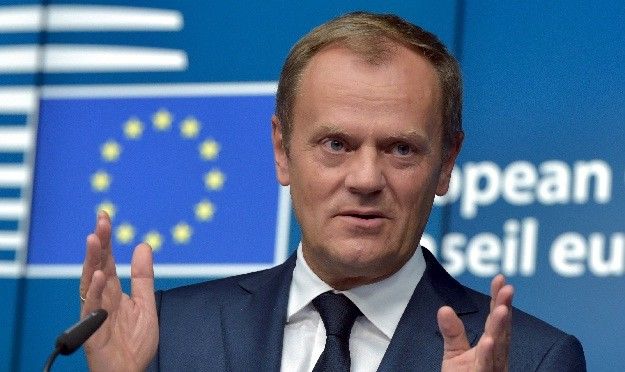 EU institutions were given a mandate to plan a summit with Turkish officials early next year, President of the EU Council Donald Tusk said late Thursday.

Speaking during a news conference after the EU leaders summit in Brussels, Tusk said, "We have a mandate to organize this kind of summit in the next months,” adding that no exact date has been set yet.

"Today we discussed about this possible summit between our [EU] institutions and authorities of Turkey," Tusk said. "In fact, I think we can say that we have a mandate to organize this kind of summit in the next months."

Tusk said EU-Turkey dialogue should continue with meetings in various formats in hopes of addressing the outstanding issues.

"We have to finalize some common initiatives with Turkey. Not only the visa liberalization, we need the fulfillment of our benchmarks," Tusk said.

The President of EU Council said it is still "very difficult for Turkey to fulfill every aspect, especially when it comes to terrorism law.

"I know that this is not a sign of a bad intention, but objectively they [Turkey] are in a very difficult situation."

Tusk added that in the upcoming summit, Turkey's deal with the EU can be discussed.

Turkey and the EU signed a refugee deal in March, which aimed to discourage irregular migration through the Aegean Sea by taking stricter measures against human traffickers and improving the conditions of nearly three million Syrian refugees in Turkey.

The March 18 deal also allowed for the acceleration of Turkey’s EU membership bid and visa-free travel for Turkish nationals within the Schengen area.

In a joint statement dated Nov. 29, 2015, the EU and Turkey had confirmed their commitment to re-energize the accession process.

Turkey formally applied to become an EU member in 1987, while accession talks began in 2005.

However, almost a year later, on Nov. 24, the European Parliament approved a non-binding motion to freeze EU-membership talks with Turkey, in response to post-coup investigations and recent developments in the country including measures taken within the framework of the fight against the PKK and FETO terrorist groups.